Today was easily the best weather we’d had so far. It was very clear, and very hot. After we’d checked out last night’s Ninia, Rowland declared that we were going to chill the **** out.

Thus, I spent much of the day lying on my bed, T-shirt off, feeling very serene and trying to see if I could actually take a siesta like you’re supposed to. Sadly I’ve never been one for sleeping during the day. But I spent much time reflecting on how great this place was. I was loving it – not just the surroundings and the wildlife, but the solitude. Just the sound of a car engine (it was those birdwatchers) sounded out of place. I could see why people get addicted to this sort of travel.

Here’s something we found in the morning: a leaf that some leafcutter ants were working over.

At 4:30, the day had cooled and we went for a walk up the Jaguar Trail, where we saw some spider monkeys (who were none too pleased to see us) and three new lizards to add to our list: Norops uniformis, Sphenomorphus cherrei, and one that Bruce was particularly keen to see – Coleonyx elegans, the Yucatan banded gecko.

As you can see, it’s a very beautiful lizard whose body shape looks very similar to a leopard gecko – they do in fact belong to the same family. Bruce tried to catch it, but unfortunately it dropped its tail and got away.

We began the day with our first proper daytime survey, heading east again through the natural edge of the forest. 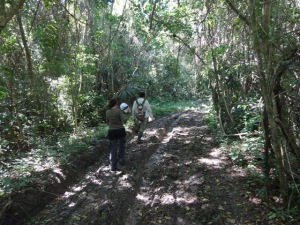 The main problem was the mosquitoes. I haven’t really given much mention to the mosquitoes, but they were a constant presence whenever we went into the forest. And they seemed to be even more voracious during the day than they were at night, no matter how much Mosiguard I applied. (Non-DEET repellent was necessary as DEET could harm the herps we handled.) I actually thought I was doing OK for bites compared to some of the others, but that was because I had no access to a mirror – once we were back in Flores and I did, I found my back and shoulders to be absolutely peppered. Still, I haven’t gotten malaria yet – and even better, unlike my previous travels in South Africa, my anti-malaria medication had no side effects, though it tasted so vile I could barely get it down.

Outside of many more frogs and toads, and a turtle, we saw this lovely pink dragonfly that we spent a long time photographing.

Had to skip the evening walk as I wasn’t feeling well. Fortunately, my fear that the others would find a Bothrops without me was not realised.

We may have done some long walking thus far, but today was going to be a real trek. We were going to do the Waca Trail, which would require going downriver to get to the beginning, walking seven kilometres to the Waca ruins at the end (including an uphill stretch) and seven kilometres back. And from what we had heard, it was going to be a bit wet in some places. I placed trust in my waterproof walking boots; experience has taught me that long-distance walking in wellies gets uncomfortable. 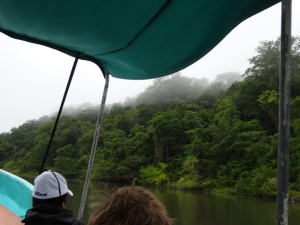 A short trip in the boat to the start point, and off we went, battling the ever-present mosquitoes. We came across a few big puddles and muddy patches, but it was just short of the trail’s camp (about a third of the way along) that we reached a flooded point there was no way to go around. I would have to walk across the shallowest bit. I took one careful step, then another – the water wasn’t quite reaching over my boots and nothing appeared to be seeping in.

And then just short of the other side, I put my foot down in the wrong place and my boot sank beneath the water. Damn. I was left walking the rest of the trail with a distinct squelch in my right foot.

Continuing on, there was nothing worse than a bit of mud, and we spotted some very tiny tungara frogs (Engystomops pustulosus), plus plenty of toads. Bruce and Futha were also certain they had spotted a jaguarundi.

Then we got to the last quarter, and the climb – the very steep, very long climb. By the time we got to the top, I was sweating more than I ever thought possible, and mentally begging for a rainstorm to cool me off. 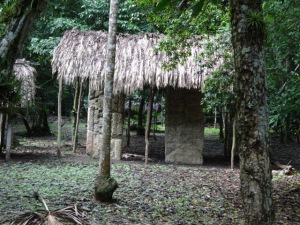 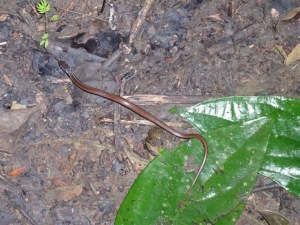 At the top, we were given a tour around the scattered Mayan ruins, and then it was time to head home. We went down a different route downhill, and it wasn’t nearly as hard. At one point at ground level, we found a very thick trail of army ants crossing the path, forcing us to all show off our long jump skills. More wildlife appeared along the way: there were spider monkeys and scarlet macaws at the higher altitudes, we saw a few peccaries run across the trail, a baby black-striped snake (Coniophanes imperialis) turned up, and back at the boat, an otter briefly surfaced. When we got back to the most severely flooded area, I walked along a very slender tree trunk like a tightrope, using a snakehook for additional support, and escaped without getting my feet wetter.

I was very happy for the cold shower that day.

This dwarf gecko turned up in our bedroom in the afternoon. Without anything good to catch it with, and being concerned about delicacy, I took a photograph, thinking it was just another Sphaerodactylus glaucus – only for Bruce to see the photo and suggest it might actually be Sphaerodactylus millepunctatus, a new species for our list, making me feel quite annoyed at myself for not catching it! However, it turned up again the next day (inside Sheri’s boot) and we determined it was S. glaucus after all.

Rather than go for a walk in the evening, we took the boat out on the river instead. A few crocodiles revealed themselves by eyeshine from some distance off, but we also managed to get up close to a juvenile (unfortunately, I was in the wrong place in the boat to get a picture of it).

Hi there. I've been blogging since January 2014, and I like to talk about all sorts of things: book reviews, film reviews, writing, science, history, or sometimes just sharing miscellaneous thoughts. Thanks for visiting my blog, and I hope you find something that interests you!
View all posts by R.J. Southworth →
This entry was posted in Nature, Travel and tagged conservation, Guatemala, Las Guacamayas Biological Station, lizard, Project Chicchan, snake. Bookmark the permalink.