In the morning, Rowland, Sheri and I followed the natural edge trail all the way to its end – the agricultural edge, where the locals had been working and cutting a firebreak. Rowland’s previous expedition had revealed significantly less biodiversity here compared to all the other habitats, but he hadn’t been able to do as many surveys as he would have liked. As it was, we only found a couple of Gulf Coast toads.

In the afternoon, I found I had made the mistake of leaving an apple inside my suitcase, and now it was full of ants! Fortunately, they were small and harmless ants, and I seemed to have cut them off early before a whole swarm could turn up. Even more fortunately, my cereal bars, still in their wrappers, were unharmed.

Another photography session was had when we found a tree frog (Trachycephalus venulosus).

In the evening, we turned our attention to Christmas. It was a strange experience, not just having my first Christmas away from my family, but starting the main celebrations on Christmas Eve. Everyone at the station stayed up until midnight, with plenty of beer, rum and Coke going around, and when it was finally officially 25th December, we had our Christmas dinner – chicken, and a traditional cake. Feliz Navidad!

Christmas Day – and out here, there wasn’t much to indicate it. Here in the forest, away from civilisation, there was very little sense of the passage of time. It was almost just another day.

I had arranged for my family to call me on Rowland’s phone at 9am (3pm back in England) though due to the communication difficulties, I had no idea if they’d received my scheduling message or not. Luckily, they had, and I spent a happy quarter of an hour letting everyone know I was OK and enjoying myself.

Around lunchtime, we relaxed by going fishing on the river – though all we actually caught was baitfish.

Then in the afternoon came another new snake – a false terciopelo, Xenodon rabdocephalus, so named because it looks quite similar to Bothrops asper (which goes by a number of names – barba amarilla, terciopelo, and fer-de-lance). This was unlike any snake we had seen so far: extremely feisty, and while Rowland wasn’t sure how potent its venom was, a related species has put people in hospital. We left it to settle, for a proper examination the next day.

No survey this evening – we were all too tired!

Our original plan was to walk the whole Jaguar Trail in the morning, but again, everyone was too tired. Instead we took a shorter route and headed up to the Mirador, the viewpoint at the top of the hill above the station. It was a rickety old tower, with a steep ladder, and was only considered safe for up to six people. The top, however, provided a brilliant view, out across the river to the cultivated land outside the reserve. And this was in spite of the fact that it wasn’t even a very good day; drizzly and hazy. 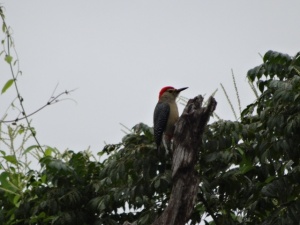 In the afternoon, we turned our attention back to the Xenodon, and took turns practicing handling it. My main experience of handling snakes like this came from South Africa, where I’d been able to use a grabber on the faster, more slender snakes, while the snake hook had been reserved for the fat puff adder that tended to stay on it very easily. The Xenodon was much more flexible and agile; the technique required sliding the hook under its body, then reaching in, taking hold of the tail, and lifting the snake into the air while keeping it balanced. I did manage to get the hang of it eventually. The Xenodon was then taken back outside for some photography, with Bruce waving his hat in front of its head for Rowland to get some open mouth shots. The Xenodon is a rear-fanged snake, with its fangs set back in its mouth; as opposed to cobras and coral snakes, which have small fixed fangs at the front of the mouth, and vipers like Bothrops and the European adder, which also have front fangs, but can fold them back inside their mouths. 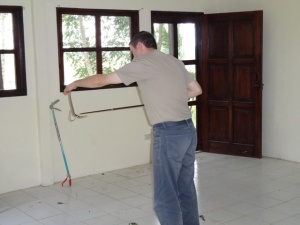 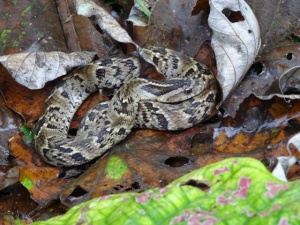 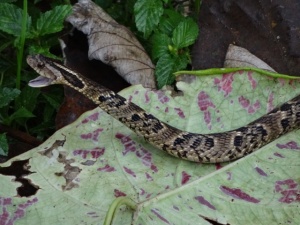 Soon after that, it was Futha’s turn to get the animal she particularly wanted to see. She had hoped to spot some toucans, and about four collared aracaris turned up on a tree on the station, giving me an excellent opportunity to try out the zoom on my new camera. 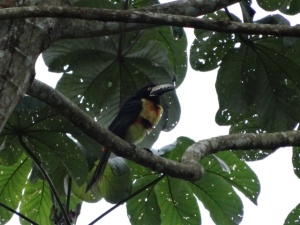 We were back on the Jaguar Trail that night, not all the way around but most of the way down one side. It was 1am by the time we got into bed, partly because there were so many other things beside herps distracting us that night. Most exciting was a kinkajou, perched directly above our heads. Then at one point on the way back, there was a loud crashing noise in the trees to our right; Bruce, ever the adventurous one, headed out to the spot with a torch to see if he could find peccary tracks. The final result was inconclusive; Rowland suggested it was an armadillo, which tend to sound much larger than they actually are when they move through the forest.

I managed to get some wildlife shots during breakfast this morning (breakfast was usually tostada or scrambled eggs, but on a few happy days, pancakes). First there were the kingfishers, which were very common around the river, and always very noisy in the morning. Also some spider monkeys passed in the trees overhead. Unfortunately I didn’t manage to photograph any hummingbirds, which were often to be found around the feeders outside the dining area.

The afternoon saw us making a brief return to the Waca Trail to drop off our baby Coniophanes; while on the river, we got our best view of a crocodile yet! 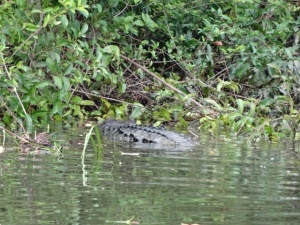 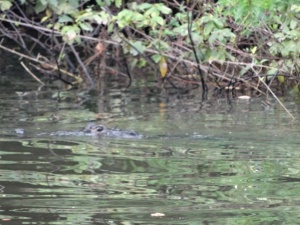 On our night walk, I spotted an Imantodes and a Ninia, bringing my total of personally spotted snakes to four: not too bad for my first tropical expedition. Once again, there was much more besides, such as a Trachycephalus, a velvet worm, and some very large owl butterfly caterpillars. The forest is a busy place at night. 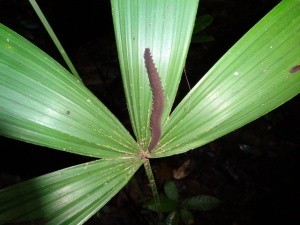 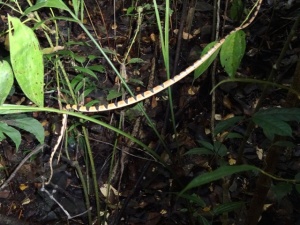 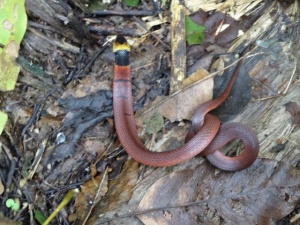 Hi there. I've been blogging since January 2014, and I like to talk about all sorts of things: book reviews, film reviews, writing, science, history, or sometimes just sharing miscellaneous thoughts. Thanks for visiting my blog, and I hope you find something that interests you!
View all posts by R.J. Southworth →
This entry was posted in Nature, Travel and tagged conservation, crocodile, frog, Guatemala, herpetology, lizard, Project Chicchan, snake. Bookmark the permalink.