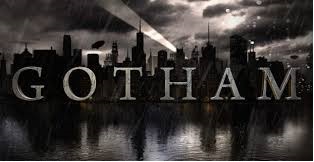 Agents of S.H.I.E.L.D. is coming back to UK screens soon, which I’m very excited about – but in the meantime, there’s more comic book-themed TV on, in the form of Gotham. When I first heard about this idea, I wasn’t too sure. I’d always thought of Arrow as a discount Batman TV series, and I lost interest in that partway through the second season. This sounded like another attempt to have something close to a Batman TV series without actually having Batman (I’ve heard there’s some legal issues preventing it, but correct me if I’m wrong). So, could it work?

Well, I watched the first episode on Channel 5, and I reckon there’s potential at least. Perhaps the main problem with it was that most of what happened felt quite generic – things you could see in any police drama, except this one happened to be set in Gotham City and concerned the murder of the Waynes. And when we got the obligatory cameos by future supervillains, it felt more forced than cool: those random appearances by the future Catwoman were irritatingly cryptic.

On the other hand, I did like Robin Lord Taylor’s performance as Oswald, and Sean Pertwee as Alfred. (But Gordon’s fiancée, not so much.) Some of the final scenes gave great potential for future developments, like Gordon’s conversation with Carmine Falcone and the paradox of the mobster wanting to retain some law and order in Gotham. I’m also hoping to see more of Gordon and Bruce, and how that relationship might tie in to what Gordon hopes to achieve.

Not much more I can really say, given that it’s just the first episode and it’s not as complex as Doctor Who, but yeah, let’s see how it goes.

Hi there. I've been blogging since January 2014, and I like to talk about all sorts of things: book reviews, film reviews, writing, science, history, or sometimes just sharing miscellaneous thoughts. Thanks for visiting my blog, and I hope you find something that interests you!
View all posts by R.J. Southworth →
This entry was posted in TV Reviews and tagged Batman, Channel 5, Gotham. Bookmark the permalink.

8 Responses to Gotham: Batman without Batman?