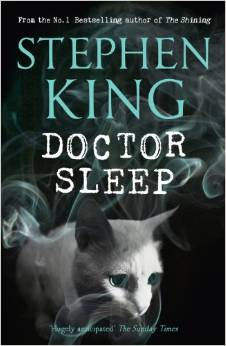 36 years is a long gap between an original story and its sequel; but according to the author’s note, Stephen King had already been spent many of those years wondering what happened to Danny Torrance, the young boy from The Shining, before he finally got round to writing his story down. The result was Doctor Sleep.

When we first encounter Danny as an adult, he’s sadly become an absolute mess: the mental stress caused by his psychic power, “the shining”, has caused him to become an aimless alcoholic wandering between jobs and locations. After moving to a small town in New Hampshire, and meeting some of the right people, Danny begins to turn his life around – and at the same time, makes a mental connection with a girl named Abra, who possesses the shining even more strongly than he does. Years after their first communication, Abra is targeted by the True Knot, a gang of immortal creatures who feed off psychic children, and Danny has to step up and help her.

I liked this book a lot more than The Shining. Comparing the two feels like comparing Alien with Aliens. It’s not that Doctor Sleep is particularly action-packed, but it has a quicker pace than The Shining, which was quite a slow-burner. There’s much more constant movement in the story – even though the story as a whole takes place over a number of years – which makes it more compelling. And as a sequel, it doesn’t feel forced; it features both a believeable continuation of Danny’s story – sadly, watching what alcohol did to his father hasn’t stopped him from falling victim to it himself, after everything he’s suffered – and fresh elements in the form of Abra and the True Knot.

The story, for the most part, is played out very well, without being too predictable. I like stories about intergenerational friendships, so I enjoyed seeing the relationship between Danny and Abra develop, as well as how active a role Abra herself plays without being the helpless protectee like in a video game escort mission. I also really liked Danny’s relationships with his older friends; how they help him through all his problems, and the amount of trust he is eventually able to place in them. Presumably, as in many of his other stories, King drew a lot from personal experience here – having been an addict himself until getting an intervention – and I like how he portrays the value of friendship in these situations. Sometimes, even when you think you don’t deserve help or you can’t be completely honest, people will surprise you and stick by you.

Meanwhile, the villains are exceedingly hateable and it isn’t long before you’re dying to see them get what’s coming to them, and the clear danger that they pose to Abra is built up very well.  However, the main flaw of this story is that once the villains start making their move, things go a bit too well for the good guys. The villains don’t have enough luck on their side; their plans go awry too often, and when we get to the end of the second act when things are supposed to look bleakest for the heroes, it isn’t too long before the scales tip back in their favour. This reduces some of the tension, so by the climax, I wasn’t feeling as worried for the heroes as I should have been. Yes, they have to suffer and put the effort in and think on their feet – but not quite as much as, say, the heroes from It did.

But everything else in Doctor Sleep works very well, and I consider it a sequel that’s better than the original. Rating: 4/5.

Hi there. I've been blogging since January 2014, and I like to talk about all sorts of things: book reviews, film reviews, writing, science, history, or sometimes just sharing miscellaneous thoughts. Thanks for visiting my blog, and I hope you find something that interests you!
View all posts by R.J. Southworth →
This entry was posted in Book Reviews and tagged book review, Danny Torrance, Doctor Sleep, Stephen King, The Shining. Bookmark the permalink.