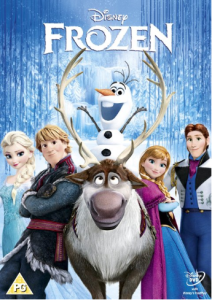 It’s now just over a year since Frozen – the highest grossing animated film of all time – first came out in cinemas. And it’s still massive business. This Christmas just gone, merchandise was all over the place. At Christmas-themed public attractions, Frozen characters often seemed almost as essential as Santa.  A sing-along version was re-released in cinemas. And “Let It Go” was being used in non-Disney adverts.

I’ve wanted to write something about Frozen for a while; maybe I held off because I couldn’t think of much new to say when it’s already been pulled apart so much. I first saw it on DVD some months after it was out in cinemas, and I felt it was one of the best Disney films to come out in some time.

The story feels quite different from many other classic Disney films. It doesn’t have very much in common with its original source material, Hans Christian Andersen’s “The Snow Queen” – only that there’s a queen with powers over winter, and there’s some trekking in the wilderness involved. Instead, the writers took the basic concepts from the original story and turned it into a completely different entity, one that so much can be done with. The relationship between the sisters Elsa and Anna is at the heart of the story, but there’s also how Elsa has to cope with having such power, a bit of romance, and the overall quest to bring summer back to the land – and all these layers are generally balanced very well. Admittedly, maybe the third act is a bit fast and feels slightly anti-climactic as a result, but that’s not a significant flaw.

Amongst all this, Frozen brings some twists to expected traditions in family films (i.e. the nature of true love and the role of the prince), but without being heavy-handed about it and shouting to the audience “Look! You see how clever we’re being?” It’s funny how this film successfully incorporates these unique aspects while still slotting into the general category of Disney fairytale films – as opposed to say, Enchanted, which was designed to make fun of the Disney formula. The subversions in Frozen don’t feel forced or awkward at all; they’re just part of the story.

The characters are all very likeable in their own way. Disney seems to be making their princesses more three-dimensional by putting them through psychological torment: after having Rapunzel be a victim of emotional abuse, we now have Elsa suffering through mental and actual isolation, and hiding a very important aspect of herself while being terrified of the consequences should anyone find out. Watching her personal journey is very compelling, and sometimes quite painful. While Anna is closer to a traditional Disney princess – innocent, cheerful, dreaming of true love – the film explores just why she ended up the way she is, and gives her some unique quirks as well.

I was expecting to be intensely annoyed by Olaf the snowman, but he’s hardly even irritating; he’s actually very pleasant and funny. Perhaps it’s because he’s not so in-your-face as some other comic relief sidekicks. And I find Prince Hans, who turns out to be the main villain, really fascinating. Unfortunately we don’t get to see much of him being evil, since it only comes out around the beginning of the third act, but it adds an extra level of intrigue when you’re watching the film again and observing his apparently benevolent behaviour. He manipulates Anna perfectly and he seems very good at improvising. When he first meets Anna, did he already know who she was – and is he going for a basic ‘awkward friendliness’ approach before he reads her more and tailors his interactions with her appropriately? It’s a level of thought and cunning I really like to see in a villain, rather like what I thought of Mother Gothel in my Tangled review.

The soundtrack is a real standout, and probably another reason why this film has done so well. With the possible exception of the troll song, it’s just like the soundtracks of the best known Disney Renaissance films, in that the songs are very catchy and very amenable to being sung along to. Some people may be just as annoyed by “Let It Go” as they were by “My Heart Will Go On” once upon a time, but I still enjoy listening to it. And the animation is superb, too: not just the beauty of the winter landscapes, but the subtleties of the characters’ expressions – again, much like Tangled.

So why is this film so popular, then? The quality of the songs probably helped. Plus the wintery theme allowed it to fit in well with Christmas, even though Christmas itself doesn’t factor into the film at all. (Frozen was released in the UK before Christmas 2013, as opposed to, say, Big Hero 6, which came out in the US in November but will only be out in the UK later this month.) There’s the appeal and likeability of the two main characters, especially for children. And, like I said, Frozen really stands out among other Disney films while still being another enjoyable fairy tale.

If there is indeed a sequel, as has been strongly suggested for the future, I’d definitely go and see it. There are plenty of directions in which the story could continue: Elsa still has work to do as queen and may need to work on public relations; there may be extra layers to her abilities that she hasn’t figured out yet; they could introduce a new villain or bring back one from the first film. Expectations for a sequel would certainly be high, and it probably wouldn’t be quite as good as the first film – but then, Toy Story 2 managed it.

So, to sum up, one of Disney’s finest – maybe some of the hype is over the top, but it would be wrong to call it undeserved. Rating: 4.5/5.

Hi there. I've been blogging since January 2014, and I like to talk about all sorts of things: book reviews, film reviews, writing, science, history, or sometimes just sharing miscellaneous thoughts. Thanks for visiting my blog, and I hope you find something that interests you!
View all posts by R.J. Southworth →
This entry was posted in Film Reviews and tagged Disney, Elsa, film review, Frozen, Let It Go. Bookmark the permalink.