The frogs are back!

As I’ve probably mentioned a few times, I love amphibians and reptiles. And over the past week, I’ve been looking out for the reappearance of the UK’s most widespread amphibian: the common frog (Rana temporaria).

Once these frogs emerge from hibernation, they will form large aggregations in suitable breeding areas of shallow water. A male – sometimes following a struggle with other males – will grab a female in what is known as amplexus, and fertilise her frogspawn. The tadpoles will hatch within two weeks, and begin their extraordinary life cycle that sees them undergo metamorphosis into frogs.

As emergence is linked to environmental temperature, the frogs generally start breeding in the south of England before my local area in the north. But today (or possibly in the last few days) they reappeared, about the same time as they did last year. In one of the ponds where I usually find them, I saw four pairs already in amplexus, looking reasonably content. 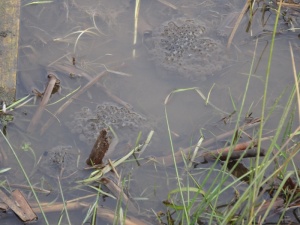 Curiously, there’s another pond where I usually see frogs breeding that hasn’t shown any signs of activity yet. Maybe there’s been a change in it, though there’s nothing obviously amiss.

If you’ve seen any amphibians or reptiles where you live, please add them to the online ARGUK Record Pool.

Hi there. I've been blogging since January 2014, and I like to talk about all sorts of things: book reviews, film reviews, writing, science, history, or sometimes just sharing miscellaneous thoughts. Thanks for visiting my blog, and I hope you find something that interests you!
View all posts by R.J. Southworth →
This entry was posted in Nature and tagged common frog, frog, Rana temporaria. Bookmark the permalink.

3 Responses to The frogs are back!