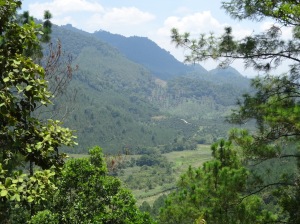 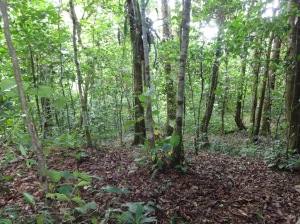 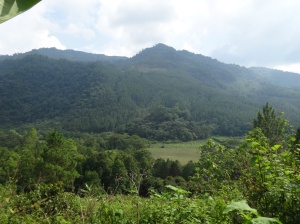 Day 6 was going to take us higher and further than we had gone before in our mission to survey the herps of the CCFC campus. We were going up to the ridge trail, right on top of the hills surrounding the campus – up into real cloud forest.

The first stretch took us on a path up the hill to the ridge; steep, but otherwise standard. From here, we joined the main ridge trail, following it across the hills, looking out for anything interesting as we went. We only encountered some relatively simple upward portions before we stopped for a lunch of sandwiches and tamales – during which I spotted a frog, which sadly evaded me. Rowland noted that the cloud forest was rather drier than it should be: we hadn’t been getting as much rain as he’d expected – this was almost certainly impacting the wildlife.

After lunch, things began getting more difficult. The trail was quite narrow in some places, and getting to the peak required some serious manoeuvring on very steep slopes. It was not only precarious – I was very grateful for my walking stick – but physically exhausting: I didn’t think much about the difference that high altitude makes, not being high enough for altitude sickness, but lower oxygen concentration must have had some effect.  At the top, we were all worn out, but pretty proud of ourselves.

Rather than retracing our steps, we kept following the trail to make our way down again, which was still quite tricky. At one point, I slipped while failing to let go of the tree I was holding; it felt like I’d almost wrenched my arm out of its socket.  During this time, however, we finally made a discovery: a red and black snake, with a yellow stripe just behind its head. A snake with such a pattern might or might not be a venomous coral snake – but we had been instructed to assume it was until proven otherwise, so Rowland took the lead in carefully bagging it. Not long after that, we made a non-herpetological but still exciting discovery: tapir tracks in the mud!  (The Baird’s tapir can be found in Guatemala.)

By the time we got back, having been gone for about five hours, I was shattered.

Still, while we were away, some of the workers on the campus had found a very interesting little snake. It was in fact a Ninia pavimentata, a species so little known that there was no photo of it in Rowland’s primary reptile book, only a picture! 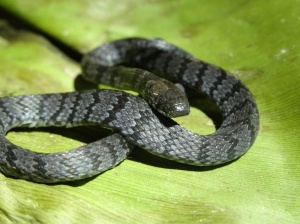 The following morning was quite exciting even though we didn’t actually go out: it was time to get out the keys again and identify the ‘coral snake’ from the ridge trail. Rowland quickly determined that it wasn’t actually a coral snake: its eyes were too big, and the scale arrangement didn’t match. For quite a while, we were stuck, repeatedly going over the keys and studying close-up photos (an alternative to over-handling the snake). The breakthrough came when we determined that the cloacal scale was divided, not undivided; from there, we were able to identify it as a Pliocercus elapoides, a false coral snake. This snake is technically still venomous, but unlike the coral snake which it mimics, its bite is not usually life-threatening. 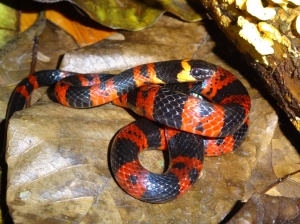 Later that day, while Rowland and Kasper went to release the Pliocercus, Graeme, Kelly and I remained at ground level to have a search around the campus. I ended up finding a black Ninia diademata, thus giving us three different species of Ninia! 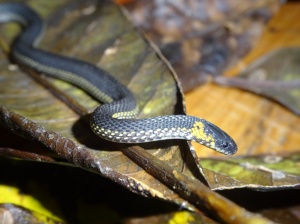 The morning walk on Day 8 brought us excitement of a rather different kind. After a cheerfully challenging climb through wet forest, our downward journey brought us out at the top of a banana field, close to where five beehives were located – and it was suggested that it would probably be safe to take a shortcut past them. As we did so, all seemed well.

Then I thought, ‘Was that a sting?’

And somebody else shouted, ‘RUN!’

It turned out that these were Africanised bees, known for being particularly defensive – and when one stings you, it releases a pheromone which tells all the others to do the same.

We charged down the hill, as fast as we could manage through the thick foliage, the bees still swarming around us. At one point, a bee actually landed on my eye – I’d like to say I remained calm, but that would be a lie. Finally, we got to the bottom of the hill and out of danger, none of us having sustained too many stings.

That night, we went out for what was easily our wettest survey. Not only was it properly chucking it down like it was supposed to, but we were walking down the stream, deep enough for the water to go over the tops of our wellies. As we trudged through the water and mud, we did at least find a pretty salamander, Bolitoglossa mulleri. 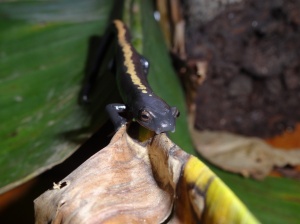 By this stage, I was feeling pretty low on energy. We also weren’t finding as many animals as before: a combination of the highland ecosystem being less diverse than the lowlands and the overall weather still being drier than normal. When we walked around the stream at night, we could still hear the glass frogs calling, but they remained tantalisingly out of reach up in the trees, when they should be heading down to breed. Still, as Rowland noted, lack of findings is still data. And if you’re interested in field biology, it’s good to get experience in such challenging conditions as this – this was still mild compared to some tropical expeditions.

Then came the afternoon of Day 10.

We had heard that a Rax k’aj had been seen around a local’s house, and so we drove up to a Q’eqchi’ village at an altitude of about 1650m. From there, we found ourselves facing a mountain – and the house in question was right at the top, almost another 300m up.

Off we all went. Even after all the climbing we had already done, it was very hard going; there was poison oak growing at some points, so you had to be careful what you grabbed for support. My main worry was that the slopes were so steep, I had no idea how I was going to manage downhill. But then, the Q’eqchi’ workers go up and down these hills every day!

About two-thirds of the way up, as we stopped to admire the spectacular view, I was given the option to stop and wait while the others went ahead, given that I was struggling a bit. But I had come that far, and I reckoned that going downhill from where we were was going to be hard enough; surely going down from the last uphill stretch wouldn’t make much of a difference.

Finally, we got to the top. I was exhausted, but on a massive adrenaline high – and when we looked around and didn’t find any snakes, it hardly seemed to matter.

I thought to myself, “I’ve got up this mountain, and if I can come down again, I can do just about anything else for the rest of this expedition.”

In this picture, by the way, that stretch of road is where we started. In the close-up, you can just about see our car. 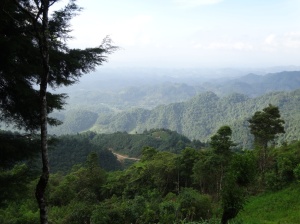 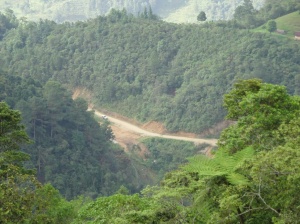 By the time we got to the bottom, I felt absolutely fantastic, ready for anything. And it was funny to think that having just climbed a mountain, in a week’s time, I’d just be back in the office.

Climbing up to 1930m altitude in the slight hope of seeing a rare viper: that’s herpetology.

Hi there. I've been blogging since January 2014, and I like to talk about all sorts of things: book reviews, film reviews, writing, science, history, or sometimes just sharing miscellaneous thoughts. Thanks for visiting my blog, and I hope you find something that interests you!
View all posts by R.J. Southworth →
This entry was posted in Nature, Travel and tagged Community Cloud Forest Conservation, conservation, frog, Guatemala, herpetology, salamander, snake. Bookmark the permalink.