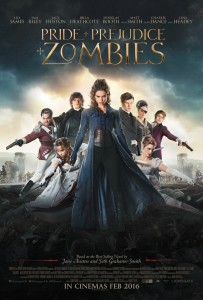 Many people reading this will probably have come across the story Pride & Prejudice – the story of romance between Lizzie Bennet and Mr Darcy, originally penned by Jane Austen – in some way, shape or form. But if you’ve ever wished that the original story had a little more excitement, of the type involving blades and martial arts, then Pride & Prejudice & Zombies might be what you’re looking for. The film is based on the novel by Seth Grahame-Smith, which basically takes the original text of Pride & Prejudice, turns Lizzie and her sisters into zombie slayers, and inserts some battles with the undead – plus a few slight changes to the plot – here and there.

Even though the drama, intrigue and foundations of the original story are still intact, the book’s approach of just making several zombie-related insertions and amendments, without any especially radical story changes, probably wouldn’t be enough to carry a feature-length film on its own: with this title, you expect something more. Fortunately, the film seems to be aware of this, and gives itself a bit more meat. Over the opening credits, we get a full backstory – courtesy of Charles Dance, who plays Mr Bennet – of how zombies have come to be swarming over Regency England. The various elements of this backstory, particularly the situation around London, remain relevant over the course of the film even as the more classic story with the Bennets, Darcy, Bingley, etc goes on. There’s a subplot involving curiously civilised zombies that it might be possible for humans to make peace with, and a reworked dramatic climax.

At the start, where Mr Darcy interrupts a whist party to track down a zombie, it looks like the film will be making fun of itself for how ridiculous the concept really is, but in fact it takes itself quite seriously – yet it still manages to work. If anything, the casual references to zombies in dialogue, and the deadly fighting prowess that many of the characters are given, flows more smoothly on-screen than it does in the novel. The merged world and story we’re presented with are reasonably acceptable without being too all over the place, and some elements are even quite clever: for example, Lizzie is looked down upon for getting her combat training in China rather than the more fashionable Japan. There’s not a huge amount of action, but just enough to still be worthwhile. One downside of the added investment into the zombie war is that this subplot doesn’t get a proper conclusion while the romantic one does. It should also be noted that whenever the zombies make their presence known, the film doesn’t tone down the horror side of things – there are rotting faces, jump scares and blood and guts, so be warned if you’re not into that sort of thing.

The best performance is by Sam Riley as Mr Darcy: the ever-stoic nature of the character lends itself very well to an experienced zombie slayer. Lily James is also here, playing Lizzie Bennet: after Downton Abbey, Cinderella, and the BBC adaptation of War & Peace (which, incidentally, you should watch if you haven’t already), one wonders if she’s getting a bit tired of costume dramas by now. At least in this film she gets to do something a bit different, using both fists and blades to take down anyone who gets in her way, though still being refined and witty when the situation calls for it. Another standout is Matt Smith, who is cheerfully awkward as Mr Collins, in a manner very reminscent of the Eleventh Doctor.

Pride & Prejudice & Zombies does have some bland moments, and I didn’t enjoy some of the horror elements, but it still uses its central concept effectively, and is a reasonably entertaining film with very good acting. Rating: 3.5/5.

Hi there. I've been blogging since January 2014, and I like to talk about all sorts of things: book reviews, film reviews, writing, science, history, or sometimes just sharing miscellaneous thoughts. Thanks for visiting my blog, and I hope you find something that interests you!
View all posts by R.J. Southworth →
This entry was posted in Film Reviews and tagged film review, Lily James, Matt Smith, Pride and Prejudice and Zombies, Sam Riley. Bookmark the permalink.