Great Films I’m Watching For The First Time: May

Posted on June 1, 2016 by Richard Southworth 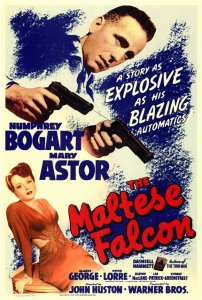 Sam Spade (Humphrey Bogart) is a private detective who is called upon to find a woman’s missing sister, only for his partner to be killed while monitoring the man that the sister was supposedly meeting. Soon after, he is confronted by another party, who believes him to have information on a priceless statuette called the Maltese Falcon. A classic mystery ensues as Spade tries to figure out who killed who and how everything is connected. I can’t say how novel this film would have been at the time, but it certainly has many elements that fans of detective stories will be familiar with: the initial client who is dishonest about their intentions, the involvement of multiple conflicting parties, and the detective being unexpectedly targeted by hostiles unknown. Looking at it from a present day perspective, it’s all pretty basic, but is still a compelling mystery, where Spade finds himself unable to trust anybody. And while character isn’t really the focus, I certainly liked Sam Spade as a character, from his capability in a hostile situation, to his laughing when being held at gunpoint – and having the unmistakeable voice of Humphrey Bogart certainly helps. 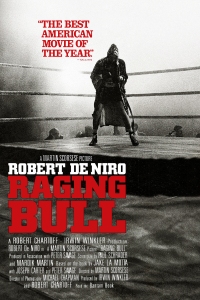 This is a Martin Scorsese-directed biographical film, about the life and career of middleweight boxer Jake La Motta (Robert De Niro) – and I really, really didn’t see the appeal. It’s pretty good stylistically: I liked the slow-motion opening of La Motta warming up in the boxing ring, and the boxing scenes themselves were done well, including the sense of chaos as fights break out in the audience. But I was barely engaged in the story, except for the discomfort I sometimes felt at La Motta’s violent, suspicious and self-destructive behaviour. I couldn’t see what the point of the whole thing was and I felt no empathy for the main character. From what I’ve seen of his work so far, I’m wondering if Scorsese just makes variations on the same film over and over – centering around the life story of a deeply flawed and unstable man, with criminal connections of some description, who initially achieves success in life, but makes the people he loves turn against him, and ultimately destroys himself through his own misdeeds and weaknesses. I’ve never seen The Wolf of Wall Street, but I suspect it plays out exactly the same way – please correct me if I’m wrong. 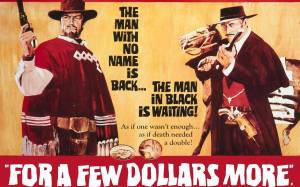 The second film in Sergio Leone’s Dollars Trilogy (between A Fistful of Dollars and The Good, The Bad and The Ugly), and the last one I’ve seen, this sees Clint Eastwood’s Man with No Name and Lee Van Cleef’s Man in Black teaming up to collect the bounty on gang leader El Indio, who has escaped from prison and is planning a bank robbery. The film takes some time to get started: half an hour in, all that’s really happened is a bunch of guys shooting each other. But overall, it’s not a bad story – there are proper thrills in the later stages – and as in the other films in the Dollars Trilogy, the staging is really good. There’s plenty of the slow tension that you find in the other two films, especially in the scene where Eastwood and Van Cleef first meet each other, showing off their shooting abilities while exchanging no actual words. There are other examples of cool cinematography, such as El Indio giving a monologue in church, with the camera positioned to make him look as tall and imposing as possible – and another scene where his gang are watching the bank they intend to rob, with the shot cutting to each one in turn as they count the time taken for the guards to move. Still nowhere near as good as The Good, The Bad and The Ugly, but still reasonably entertaining.

Directed by Stanley Kubrick and set in a dystopian British future, this film centres around Alex DeLarge (Malcolm McDowell), a delinquent teenager who enjoys leading his gang out to commit various acts of violence and abuse. After one crime too many, which ends in his gang betraying and abandoning him, Alex is sent to prison, where he is submitted to experimental conditioning that should theoretically make him a productive member of society.

This is a really fascinating film when you examine how it is constructed. It’s a film of contrasts, with Alex’s calm and civilised narration conflicting with his violent acts, and scenes like the assault of a girl being accompanied by cheerful classical music. Even the police act quite civilised as they violently interrogate Alex, almost like a parody of the British. We are given an incomplete picture of the future world in which Alex lives, like newspaper headlines, snippets of how the government works, and the slang that he uses. And again, the cinematography is creative and unconventional, from the long shadows of Alex’s gang as they approach a drunk to beat him up, to a sex scene filmed in fast motion, to close-up shots from weird and uncomfortable angles.

The second act – where Alex is in prison – goes quite slowly, but things become more compelling again in the third act where he is released following his conditioning. As I’ve said before, I like exploring the idea of choice and how it relates to good and evil, and A Clockwork Orange takes a good look at it: when Alex has been conditioned, he still technically wants to do bad things, but has been rendered physically incapable of doing them – there’s no moral choice involved, it’s more like pragmatism on the part of his conditioners. Meanwhile, Alex’s previous acquaintances choose not to forgive him for what he’s done before: his family rejects him and his victims happily torture him – and despite everything that Alex is and was, I couldn’t help but feel sorry for him here. By the end of the film, Alex hasn’t really changed in his soul, and with his fate being determined by short-sighted politicians who just want to make themselves look good, I was wondering what would happen after the film ended – probably nothing good. Such is the message of this film, I guess.

Hi, my name's Richard. I've been blogging since January 2014, and I like to talk about all sorts of things: book reviews, film reviews, writing, science, history, or sometimes just sharing miscellaneous thoughts. Thanks for visiting my blog, and I hope you find something that interests you! I have a main blog at https://velociraptor256.wordpress.com, and a blog focussed on nature at http://richardsnatureblog.wordpress.com.
View all posts by Richard Southworth →
This entry was posted in Film Reviews and tagged A Clockwork Orange, film review, For A Few Dollars More, Raging Bull, The Maltese Falcon. Bookmark the permalink.

5 Responses to Great Films I’m Watching For The First Time: May