Belfast: Birthplace of the Titanic

I’ve been to some pretty faraway places, but despite it being practically next door, I had never been to Ireland – until this week, when I took a little trip to Belfast in Northern Ireland. The main motivation for the trip was my interest in the RMS Titanic: Belfast is where the ship was built, at the shipyards of Harland & Wolff. No more ships are built in the ‘Titanic Quarter’ today; but in 2012, 100 years after the sinking, a museum/monument named Titanic Belfast was opened on the original site. 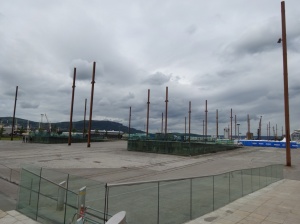 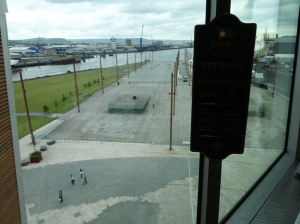 I wouldn’t be visiting the museum itself until the second day of my visit, but upon arrival, I still took a walk down to have a look. Right behind the museum is an area that is free to access: the slipways where Titanic, and her sister ship Olympic, were constructed. Both hulls had their skeletons and steel plating completed here, before being launched into the River Lagan – Olympic in October 1910, Titanic in May 1911 – and moved into a dry dock to have their funnels, engines and other internal structures fitted. Titanic‘s slipway, on the left, is marked with the outlines of deck structures that give you a proper indication of how massive the ship was; Olympic‘s slipway has an alternating pattern of paving and turf, representing the proportions of first class, second class, third class and crew who lived and died respectively on Titanic.

Just walking down these slipways, and sitting at either end, was enough to invoke a strong emotional response. There was a feeling of real significance; looking at the lines on the ground, I could envisage the ship sitting there. But it was moving, too: at the near end of the slipways were listed the names of all those who were lost in the sinking, plus the workers who died during Titanic‘s construction. 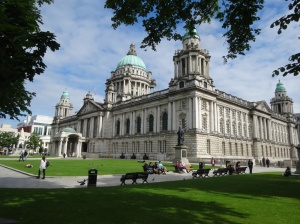 After that, I had a boat tour down the river, where I learned a bit more about Belfast’s sea-based industry, and then had a walk to the City Hall. Here, there is a memorial to the Belfast natives who died on Titanic: these include chief designer Thomas Andrews, and the eight members of his ‘guarantee group’, a collection of Harland & Wolff workers who travelled on the maiden voyage for inspections and troubleshooting.

That evening, the Northern Ireland football team were playing Germany in their final Euro 2016 group game, and I kept seeing groups of loud and cheerful people in green football shirts heading in the direction of the Titanic Quarter, where the fan zone was located. I was low on energy by that point, so I returned to my hotel and watched the match on TV. Northern Ireland lost 1-0, but still qualified for the next round as one of the best third-placers, so the crowds that passed by on the street outside afterwards had good reason to sing.

The next day, I was up bright and early to visit Titanic Belfast proper. First, before the Discovery Tour that I had signed up for, I had just over two hours to walk through the main galleries. These started by placing the Titanic story in context with Belfast at the time: its growing population, its industry, its politics and its importance as a port and place for shipbuilding. After that came the conception and building of Titanic: this included a brilliant cable car ride, through a representation of the shipyard. Accompanied by narration and hammering sounds, the cars went past hot furnaces, structures like the double bottom, and the ship’s rudder built to scale, which showed once again how massive Titanic really was. The displays that followed taught me a lot about the engineering behind Titanic‘s construction – and then it was onto the fitting out, accommodations, and the maiden voyage itself.

These displays were just as immersive as the ride had been. As well as interactive portions, there were recreations of first, second and third-class cabins; three screens that gave you a tour through the ship’s interiors; and a railing where you could look out at the sea (on a screen) and feel the vibration of the engines. Not much space was devoted to the sinking itself, more to the aftermath and the cultural impact of the disaster. Finally, there was a film showing exploration of the wreck. Most of the galleries featured some kind of recorded narration, with people speaking as if they were living at the time; it all made the story feel especially personal. That, I think, is why it felt so fresh and made such an impression. 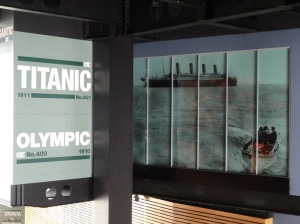 I took my time through the galleries and was just in time for the Discovery Tour. This first took us outside the drawing offices where ship blueprints were drawn up; then back out to the slipways; then back inside to some areas set apart from the galleries. Our guide told us a lot about how Harland & Wolff operated at the time Titanic was made, and about the design choices made when creating Titanic Belfast itself. The four bows around the building, for example, are the same size as Titanic‘s own bow, and the aluminium surface is designed to look like shimmering water. Inside is a wall listing every ship built by Harland & Wolff up to Titanic, and another rusted-looking wall to represent the current state of Titanic‘s wreck. I was very impressed. 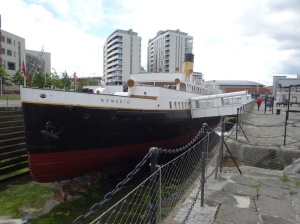 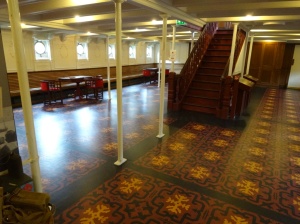 After lunch, there was one last place to visit. Sitting in a dry dock close to Titanic Belfast is the SS Nomadic, the only White Star Line vessel that survives today. Also built at Harland & Wolff, she was designed as a tender to ferry passengers between Olympic or Titanic at Cherbourg, since they were too big to dock directly – so on the evening of 10th April 1912, this little ship would have briefly sat beside Titanic herself, while such passengers as the Astors and Margaret Brown climbed aboard. The helpful and enthusiastic staff were happy to describe the series of lucky circumstances that saved Nomadic from being scrapped or destroyed in some other fashion: after working at a number of different jobs and being utilised in both World Wars, she had spent many years as a function vessel in Paris by the time she was returned to Belfast in 2006 and subsequently restored.

The Nomadic might not have been very big, but it was no less enjoyable for that. As well as the displays detailing the ship’s history, and the talking projections representing crew members, it was a pleasure to walk through the first and second class areas – looking much as they would have done in 1912 – and also up on the deck, and reflect on the historical significance of the vessel.

As I had a sit-down beside the slipways again while I waited to start heading back to the airport, I was certainly feeling reflective. The Titanic has fascinated me ever since I saw the James Cameron film; but no amount of reading, or even the exhibition in Las Vegas which features a piece of the wreck, could bring me as close to it as standing on the spot where it was built, or visiting this wonderfully designed museum. I felt in awe at the effort that had gone into the construction of the gigantic machine, and sad thinking about its loss and the 1,500 people who went with it. More than anything else I’ve experienced with regards to the subject, it made the reality of Titanic hit home.

Hi there. I've been blogging since January 2014, and I like to talk about all sorts of things: book reviews, film reviews, writing, science, history, or sometimes just sharing miscellaneous thoughts. Thanks for visiting my blog, and I hope you find something that interests you!
View all posts by R.J. Southworth →
This entry was posted in Travel and tagged Belfast, Northern Ireland, RMS Titanic, SS Nomadic, Titanic, Titanic Belfast. Bookmark the permalink.