Directed by Richard Attenborough, this war epic tells the story of Operation Market Garden in World War 2: a plan for the Allies to take control of various bridges in the Netherlands, carve a quick path to Berlin, and end the war by Christmas 1944. This film is ultimately most concerned with its story, and it proves to be a good example of writing a script to depict detailed historical events: the opening exposition is good; relevant facts are smoothly incorporated into scenes and conversations; and we are introduced to both military characters, and civilians in the centre of the conflict. There are some very good individual scenes, such as when a soldier hides from a Nazi patrol in the forest, and an intense sequence where American forces cross a river in boats while taking heavy fire from the Germans. The film also does very well with regards to its music, its set pieces, and its scale: the scene with the parachutists being dropped, and the sheer numbers of people involved, is very impressive. The whole thing is a bit too stretched, but still tells a compelling story of tragic mismanagement without pulling any punches.

Yet another long crime drama from Martin Scorsese, this time about Sam “Ace” Rothstein (Robert de Niro) who oversees the Tangiers Casino in Las Vegas on behalf of the mob. I said after I watched Raging Bull that it felt like Scorsese just makes the same film over and over, and Casino doesn’t do much to change my mind. It’s another film where there’s not much of an actual plot, just the life story of a guy surrounded by escalating crime, who gets a family and then watches it fall apart – and in the end, the message that the viewer takes away is that crime doesn’t pay. It definitely feels repetitive by the end, both within itself and compared to other Scorsese films: even Joe Pesci’s character feels almost exactly the same as his character in Goodfellas. To be fair, I felt it had more emotional value than Raging Bull. Ace Rothstein is practically saintly compared to other Scorsese protagonists: he’s no more arrogant or unstable than anyone around him – much less in some cases – and the problems he faces are more down to other people’s self-destructive tendencies than his own. There are other things that worked well: sometimes it feels like a documentary with its depiction of behind-the-scenes goings on in Las Vegas, and the use of multiple narrators. But I am pretty tired of Scorsese now.

In fascist-controlled Spain in 1944, young Ofelia goes with her pregnant mother to live with her stepfather, Captain Vidal. While the soldiers on the base struggle to overcome the resistance fighters in the area, Ofelia wanders into an old labyrinth and encounters a faun, who tells her that she is the reincarnation of a magical princess. Ofelia must now complete three tasks before the full moon, in order to rejoin her real father in the underworld.

For the first half of this film, I wasn’t very impressed by it. It certainly looked great – the design and stilted movements of the faun, and especially the horrifying appearance, sounds and movements of the Pale Man – but the story felt pretty simple. I didn’t get the purpose of the war-based setting, apart from creating a little more intrigue and tension for the main character: the fighting itself was nothing I hadn’t seen before, and the mundane and magical sides of the story didn’t seem to serve each other too much, unlike, say, Song of the Sea. Whenever I watched Captain Vidal being a fascist asshole without really understanding why I needed to see it, I just wanted to get back to the fantasy quest.

But by the end, I was left wondering if I’d been watching the film the wrong way, because I really got into it for the second half. Ofelia’s story definitely becomes more joined together: while wanting to fulfil her quest and become a princess, she is forced to confront cruel reality, and even develops a bit of a dark side herself. The relationship between fantasy and reality is complex and ambiguous: the faun tells Ofelia that if she dies a human, “All memory of you will vanish and we’ll vanish with it” – this idea ends up being revisited in Captain Vidal’s final scene, where he is denied a legendary legacy in the mind of his infant son, who instead will never even learn his father’s name. Even though the ending is given away by the very first shot of the film, it came as a shock and packed a real emotional punch; initially it looks like reality fully conquering the fairy tale, and while what follows immediately afterwards does contradict this and bring hope, even that might just be a dream. With such a brilliant ending, I feel I should watch this film again and see if the first half is better from a different perspective and less focussing on the fantasy side. 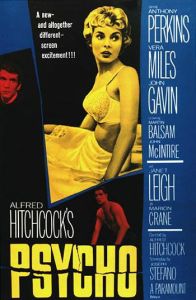 In this famous Alfred Hitchcock horror film, secretary Marion Crane steals a $40,000 cash payment from her boss – with the intent of paying off her boyfriend’s debts – and goes on the run. On her way to meet her boyfriend, she stops for the night at the lonely Bates Motel, where a young man named Norman Bates lives with his demanding infirm mother – murder ensues.

While I was already aware of the film’s final twist – that the apparent murderer, Mrs Bates, is actually Norman under the influence of an alternate personality – it came as a big surprise that Marion, whom the film appears to be setting up as the main character, is killed off just shy of the halfway point (in the famous shower scene). This certainly helps to make a memorable film, as do other subtle stylistic choices by Hitchcock: the use of the score to build tension as Marion runs away, the intimidating shades of the cop who questions her, the large stuffed bird that dominates the background while Norman Bates is speaking in one scene, and having the camera look down from above as “Mrs Bates” suddenly walks into shot to claim her second victim of the film. As for Norman himself, Anthony Perkins gives a very good performance: as he begins interacting with Marion, he initially comes across as awkward and childlike, clearly pleased to be talking to someone new, only to turn intense quickly when Marion mentions putting his mother away. After the murder of Marion, his expression and his practiced movements during the clean-up are enough to tell you that he’s done all this before. And the second-to-last image of him, dressed in a wig and a dress and looking utterly crazed, is pretty damn scary. This is a unique film that you definitely don’t forget in a hurry.

Staggering into his office while badly injured, insurance salesman Walter Neff begins recording a confession for his boss Mr Keyes: he has murdered a man, for money and for a woman, though he has ended up with neither. The rest of the film covers how Walter gets to this point: after he meets the unhappily married Phyllis Dietrichson and falls in lust with her, the two of them form a plan to trick Phyllis’s husband into taking out accident insurance, then murder him without the insurance company suspecting anything.

The fact that the film starts at the end and we know what will ultimately happen doesn’t take anything away from it: it’s the details that prove compelling. The first half, with the murder being plotted and carried out, almost feels like a heist with how carefully crafted it has to be – after that, it becomes the classic tale of an apparently perfect crime where the little complications cause everything to become fragile. There are some excellent scenes of tension, such as Walter and Phyllis’s car refusing to start as they try to escape from the scene of the crime. I liked the performance of Edward G Robinson (whom I’ve previously seen playing a crime boss in Key Largo) as Mr Keyes: he creates a clever and sympathetic character. Barbara Stanwyck gives a very seductive performance as Phyllis, and it’s understandable why Walter is unable to walk away from her, even though he sees through to what she really wants early on; theirs is a complicated relationship, and the ending, where they end up destroying each other, feels very fitting.

Hi there. I've been blogging since January 2014, and I like to talk about all sorts of things: book reviews, film reviews, writing, science, history, or sometimes just sharing miscellaneous thoughts. Thanks for visiting my blog, and I hope you find something that interests you!
View all posts by R.J. Southworth →
This entry was posted in Film Reviews and tagged A Bridge Too Far, Casino, Double Indemnity, film review, Pan's Labyrinth, Psycho. Bookmark the permalink.