Posted on August 14, 2016 by Richard Southworth 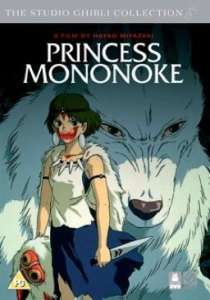 In this Japanese fantasy anime, a prince named Ashitaka saves his village from a demon: however, the demon touches him in the process, passing on a corruption that will eventually kill him. Going on a quest to find a cure, Ashitaka eventually comes to a land where giant forest gods continue to live. The land is in the middle of a conflict: on one side are the residents of Irontown, who are clearing the forest in the process of their work; on the other are the residents of the forest, including San, a human girl who was adopted and raised by the wolf goddess.

On the surface, this looks like a basic pro-environmental movie, but it manages to be considerably more complex than that. We get a good idea of how the community of Irontown works: the residents are not only just trying to survive, but are mostly social outcasts like lepers and prostitutes, given a chance at a better life by their leader, Lady Eboshi. And on the other side, the animals can be absolutely brutal in the defence of their home. It’s clear that fighting ultimately isn’t going to solve anything, but in Ashitaka’s quest to bring peace, there are no easy answers. The animation is fantastic, particularly with the tentacle-covered demons, and the dramatised violence in the action sequences. The imagery is often eerie, and certainly frightening at times. For me, the film has two weaknesses: the plot advances quite slowly, with a lot of talking that made me fidget; and given how antisocial and untrusting San is, I didn’t warm to her much as a character.

I already watched one Woody Allen film for this year’s project – Annie Hall – and I didn’t enjoy it. So what about Manhattan? Well, I liked it slightly better than Annie Hall: the various character relationships are slightly more engaging, and there were a few moments that caused me to smile, like when during a thunderstorm, the protagonist Isaac declares “I think the Chrysler Building just blew up!” The unconventional opening, where Isaac tries different opening lines for a novel to the tune of Rhapsody in Blue, gave me hope – but as it turned out, most of the things I didn’t like about Annie Hall were present here too. It mostly felt very bland; the awkwardly delivered dialogue is more annoying than profound; and Isaac – a grown man dating a 17 year old girl – is not very likeable. When I Googled Manhattan, it was described as a “love letter to New York”, but I got a better feel for the environment of New York watching Home Alone 2 or Sam Raimi’s Spider-Man films. In fact, the film being entirely in black and white made me less able to appreciate the setting. Maybe I’m just an uncultured fool who didn’t “get” this film, but I’ve concluded that Woody Allen’s style doesn’t connect with me.

This famously epic film – nearly four hours long – stars Vivien Leigh as Scarlett O’Hara, the daughter of a plantation owner in the American South; it follows her life as she feels the effects of the American Civil War and then tries to recover from its consequences, as well as her romantic interest in two men, Ashley Wilkes and Rhett Butler.

The version that I watched seems determined to be a real artistic experience: it starts with a musical overture, and introduces its cast as ‘the players’. The technicolor cinematography is wonderful, with such memorable images as the characters’ shadows against a sky on fire. The pacing is brilliant: when the film wasn’t even halfway through, so much had happened that I was wondering how much more story there could be (not that I was tired of watching it), but it keeps managing to find new sources of conflict. Despite the Civil War shaking things up, the story is still heavily character-driven, so it’s a good thing that the main characters are the strongest thing about the film.

Scarlett may not be a very endearing character, given her selfishness and her repetitive longing for Ashley, but she is fascinating to watch: constantly conflicted in what she does, certainly not a slave to tradition, and by the end of the first half, determined to claw her way out of a hopeless situation. She already has a manipulative side when we first meet her, but it’s in the second half when she really lets it out to play, in her desire to keep her land. Meanwhile, when Rhett Butler is introduced, there’s an immediate sense of mystery about him; he’s also untraditional, and he understands Scarlett and gets under her skin better than anyone else. He doesn’t stay in the role of the desirable but unreachable love interest who comes and goes, however: he goes through some major changes, just as Scarlett does. I could watch the interactions between them all day, but when they finally do seem poised for a long-term relationship, I still sensed that it wouldn’t be stable.

Gone with the Wind is such a long film that you get really devoted to the characters and it’s a shame to leave them all behind at the end. This is one that everybody should watch at some point.

After finding out that they will be raided by bandits as soon as their crops are harvested, the residents of a sixteenth-century Japanese village seek to survive by hiring samurai to defend them. Eventually, seven samurai – of varying age, experience and skill – are gathered, and settle into the village to prepare their defence.

The Western film The Magnificent Seven was based on this one, and it’s interesting to compare how the different character templates and plot points are used between the two. As with The Magnificent Seven, the culture within the film is utilised effectively, such as pointing out the less agreeable actions of samurai and how they are motivated. In the first half, there are some good fights, and I enjoyed the introductions to the diverse group of samurai. But the film is too long at 3.5 hours: it doesn’t use the characters so well later on, and I wasn’t so engaged. I also wasn’t always sure what was happening; since the film is in black and white, the similar-looking settings can get confusing. But still, not a bad film.

Former Green Beret and Vietnam veteran John Rambo (Sylvester Stallone) is wandering through backwater America when a small-town police chief decides to arrest him simply for being a vagrant. Back at the station, the police push the wrong buttons on the deeply scarred Rambo, who fights his way out and escapes into the woods; soon, he is back in full war mode, with the battle between him and those trying to capture him becoming ever more dramatic.

For the first half, the film is on a much lower scale than most well-known action films, with Rambo fleeing a handful of police and using his forest survival skills to overcome them. This doesn’t reflect the whole film, however: the situation, and the level of action, escalates until finally we get some more traditional explosions – but all of it is worth watching. John Rambo is not a traditional action movie protagonist: at the start, he has no desire to carry on fighting, but once he’s pushed a bit too far, he snaps back into war mode, reverting to what he knows. The cops end up setting a monster loose – though given that the cops are so unnecessarily dickish, I was still rooting for Rambo the whole time. The war hasn’t ended in his mind – or at least, that was the impression I got from Rambo’s final monologue, which was delivered so incomprehensibly by a crying Stallone that I could barely make out the words.

Hi, my name's Richard. I've been blogging since January 2014, and I like to talk about all sorts of things: book reviews, film reviews, writing, science, history, or sometimes just sharing miscellaneous thoughts. Thanks for visiting my blog, and I hope you find something that interests you! I have a main blog at https://velociraptor256.wordpress.com, and a blog focussed on nature at http://richardsnatureblog.wordpress.com.
View all posts by Richard Southworth →
This entry was posted in Film Reviews and tagged film review, First Blood, Gone with the Wind, Manhattan, Princess Mononoke, Seven Samurai. Bookmark the permalink.