Posted on December 5, 2016 by Richard Southworth 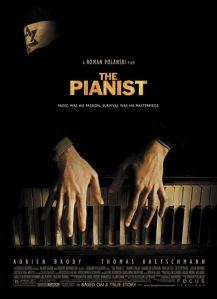 From one Holocaust movie, straight to another. This one is based on the real-life experiences of Wladyslaw Szpilman, a Jewish pianist who is caught in Warsaw when the Nazis invade in 1939; the film follows his struggle to survive, first in the Jewish ghetto, then on the outside after he manages to escape. There’s not much of a story in the first half – we’re just watching the absolutely horrific treatment that the Jews were subjected to, to the point that there are bodies just lying in the street and nobody even draws attention to them. It’s painful and hard-hitting, but it took me a while to get properly invested in what would happen to the main character specifically. Wladyslaw himself is a bystander to a great deal; on multiple occasions, we see him looking out of a window into the street, witnessing the bigger events playing out around him. Adrien Brody, who won the Academy Award for Best Actor for playing Wladyslaw, does really well, having to do most of the acting with his face as his dialogue is quite limited. Overall, the film tells a desperate, sad historical story that you can’t help but be impacted by to some degree. 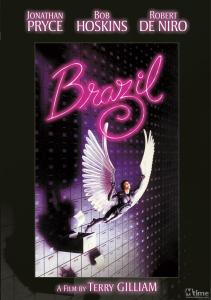 Brazil takes place in a totalitarian dystopia, where the protagonist Sam Lowry alternates between a boring, joyless life and happier daydreams of freeedom; one day, discovering that the woman he’s been dreaming about apparently exists in real life, he desperately sets out to meet her, refusing to let the red tape of his world hold him back any longer. There’s not all that much to Sam as a character – he’s a confused, average guy with very little power to actually change the world around him – but I was much more interested in the film’s world and its humour than Sam’s personal story. It’s basically an absurdist equivalent of George Orwell’s 1984, with insane bureaucracy that feels incredibly relevant.

The people who run things in this world are less concerned with an innocent man dying under interrogation than whose mistake led to his arrest and who’s going to cover the cost; they constantly want to shift responsibility for everything to someone else; and they have very little idea of what to do when confronted with an actual person who wants more than a piece of paper. There’s lots of overcomplicated, unnecessary technology that doesn’t even work properly, in keeping with the overall theme of filling the world with systems that are supposed to make life work better but really don’t. The humour is of the kind that you feel guilty for laughing at, and its illogical craziness reminds me of Catch-22. If Britain ever did descend into a dystopia, I’m pretty certain it would be like Brazil, down to the stormtroopers complaining about the size of their helmets. In fact, maybe we’re living in some slightly diluted version of it right now. 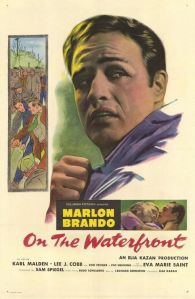 This film revolves around an American waterfront, where who gets to work and what goes in and out is rigidly controlled by the mobster Johnny Friendly. Marlon Brando plays Terry Malloy, the younger brother of Johnny’s chief enforcer, who finds himself torn between the resistance to Johnny’s rule and the mob environment that he has always known. This was another film where I needed some time to appreciate its quality; the things that make it worthwhile are really quite low-key. It’s an interesting story where the characters face several conflicts of interest, are made to suffer for doing the right thing, and those who try to break the mob’s hold are very impressive in how determined they are despite the difficult odds. It also creates a good atmosphere with its detailed city environment – down to the streets with steam rising and people going about their business in the background – and the varied community of people it presents.

I now have just five films on my list left to see: Heat, La Dolce Vita, Magnolia, Spartacus and The Sting. Will I be able to watch them all in December?

Hi, my name's Richard. I've been blogging since January 2014, and I like to talk about all sorts of things: book reviews, film reviews, writing, science, history, or sometimes just sharing miscellaneous thoughts. Thanks for visiting my blog, and I hope you find something that interests you! I have a main blog at https://velociraptor256.wordpress.com, and a blog focussed on nature at http://richardsnatureblog.wordpress.com.
View all posts by Richard Southworth →
This entry was posted in Film Reviews and tagged Brazil, film review, On the Waterfront, The Pianist. Bookmark the permalink.