Wildlife-Watching in the Philippines: Part 1

2016 was going to be my last full year in my twenties, and I wanted to make sure I went on another big adventure in that time. This time, rather than the foreign volunteer work I’ve done the last few years, I opted for a wildlife-watching holiday with Greig Smith Travels. This trip would be to the Philippines: I had never thought about going there before, but it still looked really exciting and crammed with activities. It would be my first trip ever to Asia, and the first time I’ve been further east than Greece. As an added bonus, wildlife presenter Nigel Marven would be coming on the trip – he had been in the Philippines earlier in 2016, filming his series Ten Deadliest Snakes, and thus was familiar with the places we would be visiting.

On the evening of 16th October, I arrived at Manchester Airport, where I met up with fellow traveller Kevin – other group members would be arriving from Heathrow and the States. Kevin and I would be flying with Emirates, first to Dubai and then to Manila. 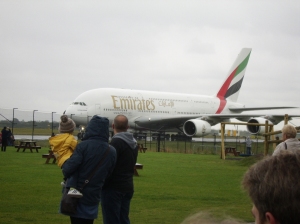 I was excited as I would get the chance to fly on the Airbus A380, a double-decker beast of a plane that I had seen landing at Manchester Airport several years earlier (pictured above). Certainly it was as comfortable as it could be, considering I was in a middle seat; the food and in-flight entertainment were both excellent. When we got to Dubai and boarded a Boeing 777 for the flight to Manila, however, I was squashed in a middle seat again, and I realised how generous the A380 had been with leg room. Not to mention, I didn’t feel well for most of the flight. Part of it was tiredness, as I still can’t sleep on planes: a few times, I would drop off, only to immediately come round again. I’ve also found that I feel worse flying long distances east than west, but with the former, I recover from any jet lag much faster, so it balances out.

When we stepped out of the airport in Manila, it was nearly 11pm, but the air was still thick and hot, a far cry from the British autumn. The transfer to our hotel gave a fascinating glimpse of the city: we passed motorcycle taxis, bicycle taxis, and taxis that resembled chrome jeeps. We later found out that these were called ‘jeepneys’ and were originally made from jeeps left behind by the Americans after World War II. At long last, we arrived at our hotel and the welcome feel of a bed.

It wasn’t a long stay at the hotel, however: we had to be up at 3:30am to return to the airport and fly south to the island of Bohol! Still, even a few hours’ sleep proved refreshing, and once we got down to the lobby, I was able to meet Nigel, our tour leader Paul Greig Smith, and the rest of the group. The flight was smooth, and we arrived in Tagbilaran Airport in glorious sunshine. Before long, we were having our breakfast at the Oasis Resort in Panglao – a small island connected to Bohol’s southwest corner – and exploring the immediate surroundings. I was especially pleased to find that the resort was connected to a beach, allowing me to experience the lovely blue sea of the Philippines for the first time – even if I was occasionally interrupted by a guy trying to sell me something.

But even when I tell myself I’m going to rest, I still often find myself getting up and about. So when Paul said that he had arranged a little expedition to the other side of Bohol to look for king cobras, I thought, “What else am I going to do?” After a long drive over some extremely bumpy roads, we reached a small farm, and followed our guides into the nearby forest.

First, we spent some time exploring a small cave – full of bats, but no snakes. Among the bamboo on lower ground, however, we happened upon an exciting find: a very beautiful Samar cobra (Naja samarensis). As you can see, the cobra raised its hood for us, but was well-behaved and did not spit. It is one of many species we would see which is endemic to the Philippines – that is, found nowhere else in the world.

Then we drove further into the hills, to see the Can-umantad Falls. It was a long descent on foot to reach this waterfall, and even longer to get back up afterwards: by the time we made it, we were all drenched in sweat! Back at the top of the hill, there was a restaurant where we could get our breath back and enjoy some chicken dishes – not to mention the herps scattered around: a tokay gecko (Gekko gecko – named ‘tokay’ after the sound of its call), and several toads. 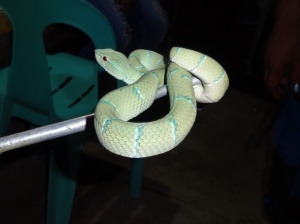 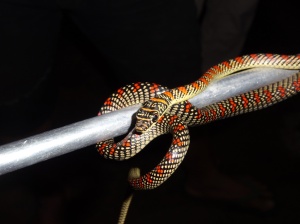 There was one last stop on the way back to the resort, as one of our guides, Samshie, took us to her house and showed us some of the snakes she had caught: a Wagler’s pit viper (Tropidolaemus wagleri), a flying snake (Chrysopelea paradisi), and a young king cobra (Ophiophagus hannah). As well as being ranked fifth on Nigel’s Ten Deadliest Snakes for the Philippines, the king cobra also featured in his episodes on China, Malaysia and India: it’s an impressive snake.

The previous night had been a late one, but if you want animals to show themselves at a convenient hour, I suppose you must go to the zoo. Today, we were up at 4:30am, to take a boat offshore and do some whale watching. Unfortunately, our boat was late, coming to pick us up at about 6am – and any whales or dolphins, apparently being early risers, were no longer around. 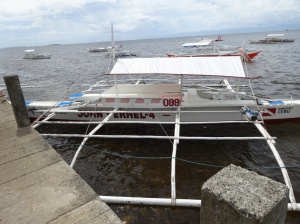 Any disappointment was short-lived, as we made the first of many journeys in a pump boat – an engine-powered canoe, with lateral supports called outriggers – to the nearby Pamilacan Island. Picking up the necessary gear on arrival, a few of us got back into the boat, and were taken to deeper water for some snorkelling. This was seriously exciting: I had never actually taken a swim over coral before. Looking down at the bottom a few metres below was amazing: a wide range of corals, from branching to brain-like shapes, and dozens of different fish, including clownfish. A short distance from the shore, the bottom suddenly dropped away, and there was nothing but an abyss: one of the others spotted the outline of a turtle, its pale shape barely visible as it slowly paddled far below us. Unfortunately, I started feeling a bit unwell – possibly a combination of the motion of the waves, and not having drunk enough water – and headed back to shore, feeling much better once I replenished my salts with a couple of bananas. 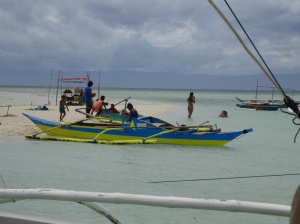 When we began heading back to the resort, the boat operators had another stop for us: a sandbank named Virgin Island. Those five words are pretty much all there was to it, yet it was still apparently enough of an attraction for stalls and a sign to be set up, and several boats to crowd around it. Sarcastic jokes were rife on our boat about the clear magnificence of this sandbank, such as one suggestion that Nigel should focus a documentary on it, and another that if you flew over it, you would see the face of Jesus.

Hi there. I've been blogging since January 2014, and I like to talk about all sorts of things: book reviews, film reviews, writing, science, history, or sometimes just sharing miscellaneous thoughts. Thanks for visiting my blog, and I hope you find something that interests you!
View all posts by R.J. Southworth →
This entry was posted in Nature, Travel and tagged Bohol, Philippines, snake. Bookmark the permalink.