Wildlife-Watching in the Philippines: Part 4

Today, we were heading to the Puerto Princesa Subterranean River National Park – and, once again, it was a pump boat that got us there. On the beach, our guide – Rommel, from Wild Expeditions Palawan – headed into the trees and persuaded a Palawan peacock pheasant (Polyplectron napoleonis) to come out into the open: this rare species is hardly ever seen, though the particular individual we met is quite used to humans, and cheerfully paraded around for our cameras. 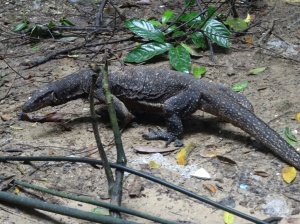 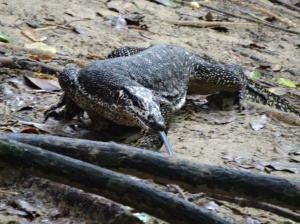 Further into the trees, massive Palawan water monitors (Varanus palawanensis) were wandering around, looking positively prehistoric; the ones on Palawan were originally considered Asian water monitors,  and were only recognised as a separate species in 2010. There were more macaques as well: when one member of the group left his rucksack unattended, a monkey started rummaging around inside, and became very annoyed when the owner objected.

Then, with hardhats in place, we got into canoes and floated into the darkness of the underground river, shining flashlights to examine the surroundings. Running through a limestone formation, the river is 8.2km long in total, and was chosen as one of the new Seven Wonders of Nature in 2011. Flying around the walls were thousands of bats and swiftlets, and you occasionally had to shield your camera from water dripping from the ceiling. There were a lot of curious rock formations, each given various names: one like a T-Rex, one called Sharon Stone due to its resemblance to a female body, and a few that were supposed to resemble religious figures. 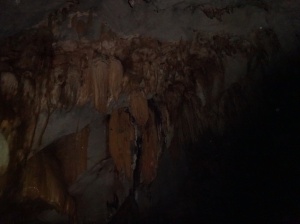 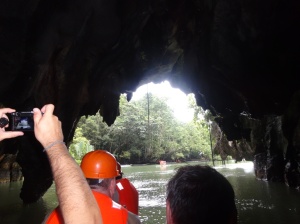 Following that, we headed back in the direction of the resort – and soon, we were clambering into paddleboats again, this time for a tour through a mangrove forest. I was hoping that I could tick ‘mangrove snake’ and ‘reticulated python’ off my list of animals to see, but there were no snakes to be found: there were, however, some young monitor lizards were basking on the mangrove roots. 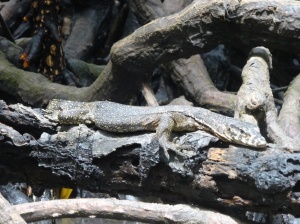 The afternoon and evening featured excursions for both birdwatching and herping, and demonstrated what a contrast there can sometimes be between the two. The birdwatching trip in the afternoon began with wandering leisurely down a road, the bird enthusiasts getting very excited at sightings and calls of species I was unfamiliar with. We also saw some Philippine cockatoos roosting – far enough away that they were just white dots in the trees even with my camera zoom. As the sun went down, we were hoping to end with a glimpse of a nocturnal Palawan frogmouth (Batrachostomus chaseni). We waited by the road, while Rommel played recordings of its call; a bird seemed to be calling back, but could not be seen. It was a tense twenty minutes or so – but just as we were about to give up, the bizarre little bird suddenly appeared, sticking around for some brief photos before disappearing into the darkness again. 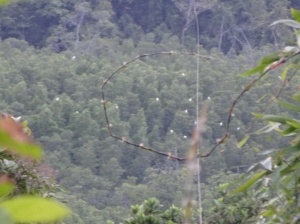 The herping trip took place after dinner; unfortunately, I hadn’t gotten much to eat. The waiting times in Philippine restaurants did tend to be long throughout the trip, but on this occasion, my meal never turned up at all because the waiter had forgotten my order! It was too late to wait any longer as we would be going out, but one of the other group members, Peter, kindly shared a bit of pizza with me.

As I already knew after my time volunteering in Guatemala, looking for snakes in a forested area at night is rather different from strolling down the road, listening for bird calls. We navigated a narrow tree trunk bridge over a stream, walked along the swampy edge of a paddy field, clambered over a mass of bamboo, went up and down muddy slopes, jumped over ditches, and walked through another stream that was deep enough for the water to go over my walking boots. When we were almost back at the vehicles, the last bridge we had to get over was basically a plank, the railing of which we couldn’t touch because it was crawling with ants, turning the experience into a balancing act. 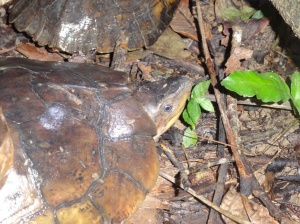 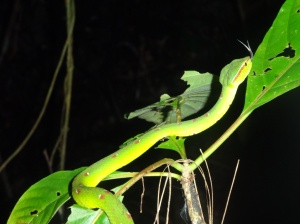 You don’t always see as many animals when herping compared to birdwatching, either – but our efforts were rewarded that night, with some Palawan forest turtles, and a lovely Palawan pit viper (Trimeresurus schultzei). Definitely worth it!

This was the free day where nothing in particular was planned. The weather wasn’t ideal – I had hoped to get some swimming or sunbathing in, but was thwarted by the rain; however, there were still other things I could do. For one thing, me and another group member, Peter (there were two Peters in the group) wanted one more crack at seeing a snake in the mangroves, so we walked down the beach for another paddleboat tour. This time, we were lucky: a beautiful mangrove snake (Boiga dendrophila) was curled up in the branches above us! Mangrove snakes are technically venomous, but their venom is relatively mild and not considered dangerous to humans. 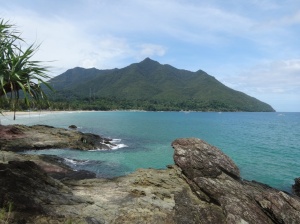 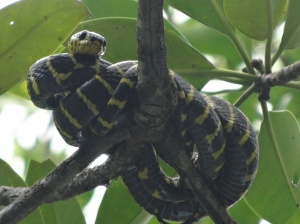 When the weather temporarily cleared in the afternoon, I joined three of the others in getting a full body massage on the beach. The best way to describe the experience would be ‘forceful’, and perhaps a little painful, enough that I had to speak up to the masseuse a couple of times – and that was just a medium level massage! Goodness knows what a hard one is like.

Our last full day. In the morning, we left Sabang and returned to Puerto Princesa, where we visited a crepe restaurant for lunch. Unfortunately, when we got into the airport, our flight back to Manila was delayed by nearly 3 hours. This was particularly frustrating as Paul had planned for our farewell dinner to take place on a cruise of the bay. 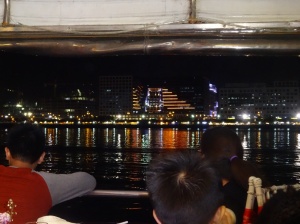 When we finally did arrive in Manila, we were already hard-pressed to get to the cruise on time – and the traffic in Manila is not known for being light and accommodating. The progress was slow, but following some calls to the cruise operators, we were given a little leeway and arrived just in time. And so we spent about an hour and a half enjoying the lights of the Philippines’ capital – which, again, felt a long way away from everywhere we had just been.

The members of the group departed one by one, given that we were all headed for different places; Nigel, for his part, was off to Sri Lanka. Kevin and I weren’t flying until the afternoon, so I took advantage of a relaxing morning after all the fast-paced travelling of the past two weeks. Then, truly sad that the holiday was over, the two of us took a taxi to the airport and flew home, again via Dubai. Aside from being put in middle seats again and still not being able to sleep, the flights were smooth and I felt fine upon landing.

This was undoubtedly another journey to remember. Having so many activities crammed in did make things a bit hectic, but it was undoubtedly worth it; just the places we saw were beautiful and unique, and there was plenty of wildlife that I felt privileged to see. The slogan is true: it’s more fun in the Philippines.

Thank you to Paul Greig Smith and Greig Smith Travels for arranging such a great tour, and Nigel Marven for coming along and being such good company!

Hi there. I've been blogging since January 2014, and I like to talk about all sorts of things: book reviews, film reviews, writing, science, history, or sometimes just sharing miscellaneous thoughts. Thanks for visiting my blog, and I hope you find something that interests you!
View all posts by R.J. Southworth →
This entry was posted in Nature, Travel and tagged Palawan, Philippines, Puerto Princesa Subterranean River National Park, snake. Bookmark the permalink.