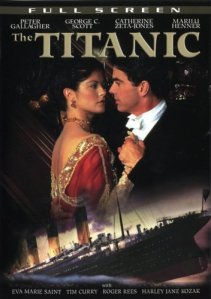 The two-part miniseries Titanic, which first aired on CBS in 1996, cannot really be called ‘good’ in the traditional sense. There are many, many things wrong with it. But aside from a couple of aspects which are in poor taste, I consider it a guilty pleasure.

There are two main subplots involving fictional characters in this series. The first is about Isabella Parradine (Catherine Zeta-Jones), who is returning home to her husband and daughter when she encounters her former lover, Wynn Park (Peter Gallagher), onboard. It turns out Wynn is still madly in love with Isabella, who is sorely tempted to abandon her old life and run away with him. It’s all a bit morally questionable – particularly with how things turn out in the end – but Zeta-Jones and Gallagher do have good chemistry together. Not to mention, Zeta-Jones looks exceedingly lovely in period dress.

Our other main protagonist is a young rogue named Jamie Perse (Mike Doyle). Boarding the Titanic with a third-class ticket that wasn’t originally his, Jamie later gets his hands on a tuxedo and takes the opportunity to integrate with the toffs in first-class. (This seems familiar somehow…) He falls in love with a virtuous Danish convert named Aase (Sonsee Ahray), and finds himself wanting to become the good man that she believes he is; but he also has a devil on his shoulder in the form of steward Simon, played with trademark cackling evil by Tim Curry. It’s a pretty basic redemption arc, but still fairly compelling.

George C. Scott may have the right looks and gruff attitude to play Captain Smith, but doesn’t bother with a British accent. Bruce Ismay, played by Roger Rees, gets one of his less sympathetic on-screen portrayals: we see him going behind the Captain’s back to ensure the Titanic is going as fast as possible, and later, he is seen literally lurking in the shadows before slipping into a lifeboat. Marilu Henner’s Molly Brown is also very over-the-top, contrary in just about everything compared to the other first-class snobs, and loudly saying things like “To hell with polite society!”

The script is deliciously cliché. We get dialogue like “My heart is divided” and “The past is behind us.” “It’s been with me every moment of every day!” We get shoehorned exposition, like the third-class Jack family arriving on the ship and giving the steward practically their whole life story for some reason. Ironic, self-aware statements are frequent, such as Ismay telling reporters that some chairs will be re-painted before the next crossing, and “We’re not going to need lifeboats,” or Isabella commenting that they’re living in a golden age, the likes of which will never be seen again. There’s even a crazy old woman delivering portents of doom at the Southampton dock. As for the visual effects, the CGI is obvious, and the camera moves so much that it’s a wonder half the people onboard aren’t constantly seasick.

There are so many blatant historical mistakes that Titanic buffs could make a drinking game out of spotting them. For example, the Titanic is facing the wrong way on the Southampton dock; Molly Brown boards at Southampton instead of Cherbourg; it is mentioned that the ship is fully booked, when it actually wasn’t; and the rescue ship Carpathia arrives in New York during the day, when it actually arrived after dark and in wet weather. Captain Smith makes the error of telling the wireless operators that CQD stands for ‘Come Quickly Distress’, when in fact it was a combination of ‘CQ’ and ‘D’, ‘CQ’ meaning that the message was a general one for all stations. And the concluding text tells us that “all attempts to raise (the Titanic) have failed”, when nobody has ever seriously tried to do so.

On the occasions that the series has done its research, it feels the need to be very pointed about it, forcing trivia randomly into the dialogue. After the collision, Captain Smith lectures First Officer Murdoch about how the ship would be more likely to survive if it had hit the iceberg head on, and that his decision to reverse the engines reduced the ability to turn efficiently. As in A Night to Remember, the nearby vessel Californian is included; but in the former film, it was integrated appropriately into the on-screen narrative and fit well with the ‘big picture’ approach. Here, the goings-on onboard the Californian serve no real purpose except as a distraction, and are eventually forgotten about. You can see why James Cameron didn’t include the Californian in his own film, except in a deleted scene.

One of the main things I don’t enjoy here is a third subplot, which centres around historical character Alice Cleaver, nursemaid to the Allison family. The series utilises the story, uncovered by a historian, that Alice had previously been charged with murdering her own baby; it goes on to portray Alice as deceitful and mentally unstable. Not only does this lead to a character whom it is difficult to sympathise with, and is almost an afterthought compared to the other two subplots, but the infanticide story has been proven false: it was actually committed by another woman named Alice Mary Cleaver, not the Titanic passenger Alice Catherine Cleaver. There’s also an unpleasant scene where Simon corners Aase in the shower and rapes her: its only real purpose is to ensure that Jamie turns against Simon when the time comes, which really could have been done some other way.

For all these problems, I still find the 1996 miniseries reasonably entertaining. Among the silliness and melodrama, there are some well-executed moments, such as just after the collision, when a glass is placed on a table and slowly slides off as the ship begins to tilt. The montage covering the final plunge captures the horror well, as people run in panic through the interior corridors, and for the first time on-screen, the Titanic is briefly shown splitting in two. The characters are varied, and the story arcs watchable, despite not being especially deep or imaginative. Ultimately, this is one you need to turn your brain off for.

Hi there. I've been blogging since January 2014, and I like to talk about all sorts of things: book reviews, film reviews, writing, science, history, or sometimes just sharing miscellaneous thoughts. Thanks for visiting my blog, and I hope you find something that interests you!
View all posts by R.J. Southworth →
This entry was posted in History, TV Reviews and tagged Catherine Zeta-Jones, RMS Titanic, Titanic. Bookmark the permalink.