Posted on June 5, 2017 by Richard Southworth

Last Saturday, I went to my first Comic Con of the year: Collectormania 24 at the NEC Arena in Birmingham. This event featured a very impressive line-up of guests, including John Barrowman – whom I’ve previously seen in concert in Blackpool – and Agent Melinda May herself, Ming-Na Wen! I decided to go in my Ninth Doctor cosplay for the Barrowman factor.

The event used a virtual queuing system for getting autographs from the most popular guests, where you picked up a ticket and then went back when it was time for your number. Co-ordinating this with everything else I wanted to do wasn’t too bad – especially as they could still fit you in if you missed your slot, as it were – but it meant a lot of going back and forth, which was rather tiring! 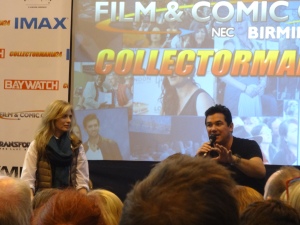 The first talk I went to was Dean Cain and Helen Slater. Dean played Superman in Lois & Clark: The New Adventures of Superman – a show I loved back in the day – while Helen played Supergirl in her solo movie in 1984. They now both star in the TV series Supergirl, playing the title character’s human foster parents. Dean was especially jovial, saying he would certainly be willing to try being Superman again if given the chance, while Helen admitted that seeing Melissa Benoist in her own previous role did feel strange at first. 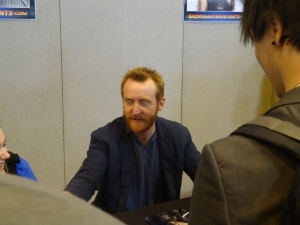 In-between talks, I got an autograph from Tony Curran. He’s appeared in a wide range of movies and TV series; most notably for me, he played Vincent van Gogh in a particularly good episode of Doctor Who. I also like his performance as the Invisible Man in The League of Extraordinary Gentlemen, for all that movie’s problems. Tony was very friendly, and also quite talkative; we shared a few words about Doctor Who and he asked what I was doing for the rest of the day.

As an Agents of SHIELD fan, the one I was really excited for was Ming-Na Wen, and she was absolutely lovely. She had recently had knee surgery after being injured filming a fight scene, and her leg was in a cast, but she hadn’t let that stop her coming to meet her British fans! She even gave out sweets at the autograph table. When getting her autograph, I noted that she was wearing a Hydra badge – a reference to current events in the show – but she showed me that she also had a SHIELD ring on. There was plenty of discussion of Agents of SHIELD at her talk, as well as other elements of her career such as E.R. Watching her really emphasised for me what a great actress Ming-Na is, as she is so different from Agent May in real life. She also expressed a desire to have a role in the live-action Mulan movie, so make it happen, Disney! 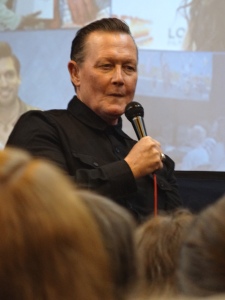 Robert Patrick, best known for playing the T-1000 in Terminator 2, also gave a talk, where he discussed the many other projects he’s worked on, and made reference to his cameos in Wayne’s World and Last Action Hero.

I wasn’t able to say much to John Barrowman when getting his autograph – he had a lot of people to get through – but his talk was a high point. He came out on stage wearing his trademark Captain Jack trenchcoat – then threw it off to reveal he was wearing a TARDIS-patterned dress underneath! Unlike with the other talks, he kept the stage to himself – he didn’t need assistance from any event staff. The talk lasted a whole hour, and Barrowman was just as much fun and full of character as he was at his concert; he told several funny stories about his work on Doctor Who, Torchwood and Arrow, with quite a few adult jokes. True to form, he finally rounded off by singing Copacabana.

I often find Comic Cons physically tiring, but emotionally, they always perk me right up – even Blackpool Comic Con in 2015, with all its difficulties, had that effect. Thank you to Showmasters and NEC Arena for putting on a great event!

Hi, my name's Richard. I've been blogging since January 2014, and I like to talk about all sorts of things: book reviews, film reviews, writing, science, history, or sometimes just sharing miscellaneous thoughts. Thanks for visiting my blog, and I hope you find something that interests you! I have a main blog at https://velociraptor256.wordpress.com, and a blog focussed on nature at http://richardsnatureblog.wordpress.com.
View all posts by Richard Southworth →
This entry was posted in Out and About and tagged Collectormania 24, Comic Con, Dean Cain, Helen Slater, John Barrowman, Ming-Na Wen, Robert Patrick, Tony Curran. Bookmark the permalink.