At the end of my last post on Kerbal Space Program, I was trying to figure out how to transport 2350 units of ore from the Mun and land it on Kerbin to fulfil a contract. But in fact, the problem was solved with surprising ease. I had in fact already fulfilled the part about mining 2350 units from the Mun, thanks to the activities of Moonbase 1; I hadn’t initially realised since Moonbase 1 had been continually processing the ore rather than storing it, but apparently it still counted. Then, as part of my planning, I performed a test flight where I filled a set of ore tanks with 2350 units on the ground, used a booster to lift it to about 10,000m altitude, and tried to bring it back in one piece with several parachutes and an inflatable heat shield. Since apparently the ore that landed didn’t have to be the same ore that was mined, the rest of the contract was thus completed. Maybe it wasn’t entirely honest, but who was I to complain?

Now I could focus on something more interesting: further interplanetary exploration. While I was working on Moonbase 1 and the ore contract, I had already sent two probes – Titan 1 and Titan 2 – on their way to the green gas giant Jool, the in-game equivalent of Jupiter. Titan 1, the smaller of the two, would fulfil another contract by placing itself in a very high orbit around Jool, ten times further out than the planet’s most distant moon. Titan 2, laden with scientific instruments and a landing stage, would conduct a more in-depth exploration of Jool and its five moons, before concluding its mission by landing on the innermost one, Laythe. It was going to take the two probes a long time to get to Jool – about three years, in fact – so I had plenty of time for other work. This included a plan for my first manned mission to the planet Duna.

The auspicious mission, Watney 2, would be launched in two stages that would dock in Kerbin orbit. The first would carry the main engine, the solar panels, and most of the fuel; I named it Hermes, after the mothership in The Martian. The second stage would perform the landing, and carry the scientific instruments and crew: pilot Jebediah, engineer Bill, and scientist Bob. Both stages were launched uneventfully, docking was achieved, and Hermes’s engine was lit up. Shortly afterwards, Jebediah, Bill and Bob became the first Kerbals to escape the gravity of their home planet and go into orbit around the Sun. Bob then performed the first of many EVAs where he collected data from the scientific equipment and stored it in the command module, allowing the equipment to be re-used at different stages of the flight.

It was a long journey of over 200 days to get to Duna, though thankfully Kerbals don’t have to worry about solar radiation or muscles that atrophy in zero-gravity. The crew didn’t even complain about being limited to a single small command module. If they were uncomfortable, then surely arriving in Duna orbit and seeing the magnificent planet up close made up for it. But before landing on Duna, Watney 2 made a detour, having enough fuel to go into orbit around Duna’s single moon, Ike. There was, after all, science to be had.

Ike is smaller than the Mun but bigger than Minmus, so landing required slowing down from a moderately fast orbit. It also featured extremely rugged terrain: even the final landing site, in the relatively flat midlands, turned out to be on a slope. After some initial scientific readings, Jebediah, Bill and Bob took the first steps on a world outside the Kerbin system – though not on a planet, but on its moon. They planted the flag, stretched their legs, then got back inside the lander. At that point, it was found that a contract had become available to plant a flag on Ike, so Bill got out again and stuck a spare flag next to the first one. Then it was back into Ike orbit for the second of three dockings with Hermes, and back into orbit around Duna.

The same lander was soon falling through Duna’s thin atmosphere; big and heavy as it was, five parachutes and two drogues slowed it efficiently, though a little burst from the engine was also used just in case. The slope on which it landed was even steeper than the one on Ike, causing the lander to slide ominously for a moment before coming to a stop. It was also in the middle of a featureless desert, but what did that matter to the crew? They were still on another planet! 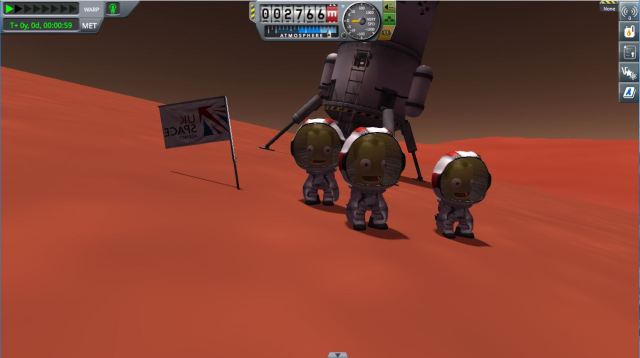 But it wouldn’t be me if I didn’t make one little mistake that threatened to bring disaster. The main reason why Engineer Bill had come along was so that he could repack the parachutes which were used to land on Duna, allowing the same spacecraft to land back on Kerbin at the end of the mission. I had not realised that an engineer had to be at least Level 1 to do this, and Bill was not quite there. The crew could get back to their home planet alright, but any success up to the point of re-entry would be rather redundant if the capsule had no parachutes. Fortunately, I was able to come up with a plan, but it would be some time before I could put it into action. For one thing, the crew – once back in orbit and docked with Hermes – now had to wait for their transfer window back to Kerbin. For Kerbin and Duna to move into suitable positions took so long that before the window opened, Titan 1 and Titan 2 were arriving at Jool, so I shifted my focus to them.

Both probes had made course corrections on their journey which ensured they would pass as close to Jool as possible. This was to take advantage of some real-world physics called the Oberth effect, which states that when a spacecraft is travelling faster (e.g. when it is closer to a planet), it has more potential energy and is able to make a more efficient engine burn. Titan 1 was passing so close to the massive Jool that if it did not go into orbit, Jool would catapult it into an orbit around the Sun so wide that it would practically fly out of the game; it would not reach periapsis for 1,496 years. But that would be of no use to me, so I burned the engine and with minimum delta-V, placed Titan 1 in orbit, before expanding said orbit to fulfil the satellite contract.

Titan 2, upon arrival in Jool orbit, had a more complicated and fun time of it. After a brief encounter with Jool’s second moon, Vall, it headed out for low-altitude flybys over the two smallest and most distant moons, Pol and Bop. A great deal of science was transmitted back to Kerbin, and one new achievement after another was logged as the probe encountered new bodies. Unfortunately, Titan 2 did not have quite enough fuel to encounter all the moons, so it then headed straight for its final stop, the watery world of Laythe. Laythe’s atmosphere proved surprisingly thick, surrounding Titan 2 with intense flames as it descended. And as it neared the sea, the lander’s parachutes seemed to be guiding it to a smooth splashdown – until the probe abruptly turned upside down, coming to rest with its heat shield pointing to the sky and its solar panels rendered useless. It transmitted a good chunk of science before its batteries ran dry, but it was an ignominous end for such a successful probe.

Back to Duna. Once the transfer window was open, Jebediah, Bill and Bob were first treated to the sight of Duna receding into the distance, then – after another long 250-day journey – to their beautiful home planet reappearing. A couple of aerobraking manouvers in the atmosphere were enough to place them back in orbit. The plan had been to leave most of the lander at Duna, drop the command module into Kerbin’s atmosphere, and place Hermes in orbit for future use; but thanks to their lack of parachutes, the crew had to hang around in Kerbin orbit, and retain their lander engine which would bring them down again. I had to recover the spacecraft as well as the crew, so what to do about the parachutes?

Fortunately, Kerbin’s astronaut office did have a Level 1 engineer, Maxbeth Kerman. She lifted off in a small spacecraft, docked with Watney 2, and performed an EVA to repack all the parachutes. Soon after that, Watney 2 landed in style, holding onto its landing stage through the descent, and coming down on its legs. Upon touchdown, it received even more distinctions, having returned from Duna, Ike and solar orbit!

After all that, I now have twice as much money as I did before Watney 2 launched, and enough science to unlock every component in the game. That part of the game, at least, is complete, but there’s still plenty out there to explore. Still, I’m going to do a couple of nice, simple tourist contracts before I decide where to go next.

Hi there. I've been blogging since January 2014, and I like to talk about all sorts of things: book reviews, film reviews, writing, science, history, or sometimes just sharing miscellaneous thoughts. Thanks for visiting my blog, and I hope you find something that interests you!
View all posts by R.J. Southworth →
This entry was posted in Video Games and tagged Kerbal Space Program. Bookmark the permalink.