Film review: The Shape of Water 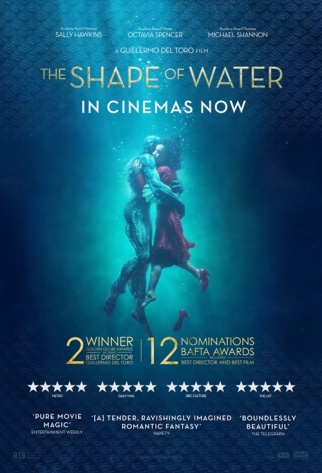 Having seen Darkest Hour last month, today I went to see another film that’s getting a lot of attention this Awards Season: The Shape of Water. Directed by Guillermo del Toro, it’s already won a great many accolades – including Golden Globes for Best Director and Best Soundtrack – and it’s nominated for thirteen Academy Awards. I’ve certainly enjoyed the previous films directed by del Toro that I’ve seen: Pan’s Labyrinth, Pacific Rim, and the two Hellboy movies. So, how was this one?

Our protagonist, Eliza (Sally Hawkins), is a mute woman working as a cleaner in a high-security research facility in 1962. One day, operative Richard Strickland (Michael Shannon) brings in a new asset to be studied: a water-dwelling humanoid amphibian (Doug Jones). Curious about the creature, Eliza finds that it is intelligent, and gradually forms a strong bond with him. Eventually, she determines to help him escape from the laboratory and Strickland’s cruel treatment – while at the same time, Soviet spies also have eyes on what’s going on.

Although I deliberately avoided reading many reviews, it was hard to go into this movie without certain expectations. Given that Guillermo del Toro was directing, I expected something bizarre, fantastical and perhaps unnerving – and it is certainly that. While there may be just the one peculiar creature this time round, in contrast to Hellboy and Pan’s Labyrinth, watching a woman fall in love with an amphibian is quite weird enough. Yet it’s an understandable relationship that you learn to sympathise with: the creature’s design and actions strike a good balance between being too human and too alien, and a human protagonist who is used to communicating without speech is a reasonable candidate to bond with him. However, given the sheer number of award nominations this film has received, I was also hoping for some special quality – and besides the whole woman-amphibian relationship, plus a lovely score by Alexandre Desplat, there wasn’t that much which made it exceptional. I couldn’t find anything especially profound, and there’s only one or two moments which could be described as “artsy”. Ultimately, it felt like no more or less than a ‘what if’ scenario, which Stephen King uses to come up with his stories: what if a mute woman formed a relationship with a non-human creature in a lab?

Sally Hawkins, whom I previously knew best for playing Mrs Brown in the Paddington films, definitely gives this challenging role her all. Unable to use her voice, she puts everything into her expressions, combined with use of sign language which gives her “dialogue” more emotional impact than if she were saying it out loud. Richard Jenkins and Octavia Spencer are also very good as Eliza’s friends Giles and Zelda, but I would have liked a more fleshed-out villain like Michael Shannon’s Strickland: he’s just the standard callous, aggressive government arsehole in a black suit, and even more despicable than General Zod, expressing a desire to rape Eliza at one point.

There’s a lot of good in The Shape of Water, and nothing I’d really call bad. It’s a thoroughly decent watch. Still, I was hoping for something more than that. Rating: 3.5/5.

Hi there. I've been blogging since January 2014, and I like to talk about all sorts of things: book reviews, film reviews, writing, science, history, or sometimes just sharing miscellaneous thoughts. Thanks for visiting my blog, and I hope you find something that interests you!
View all posts by R.J. Southworth →
This entry was posted in Film Reviews and tagged film review, Guillermo del Toro, Sally Hawkins, The Shape of Water. Bookmark the permalink.