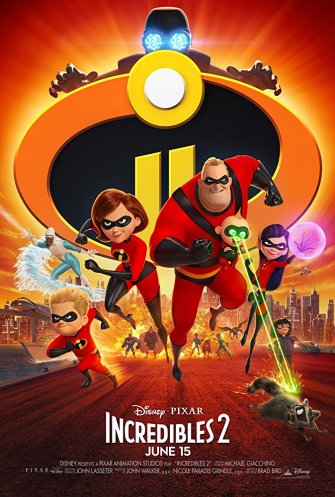 The Incredibles is both one of my favourite Pixar films and one of my favourite superhero films, and you’d think that coming up with a sequel wouldn’t be that hard, especially considering the number of other sequels that Pixar has made. And yet it’s taken fourteen years. Think about it: The Incredibles came out in the same year as (the original) Spider-Man 2, and four years before the Marvel Cinematic Universe got going – I don’t know about you, but I feel old. Anyway, is it worth the wait? Absolutely!

The film begins right where the first one left off, with the super-powered Parr family leaping into action to battle the Underminer. Unfortunately, it doesn’t go terribly well and there’s an awful lot of property damage, leaving the government disinclined to make superheroism legal again. Without a home or income, things aren’t looking good for the Parrs – until they are approached by rich superhero fanatic Winston Deavor and his sister Evelyn, who are pursuing a more organised campaign to build support for super legalisation. Helen, aka Elastigirl, is chosen to spearhead this campaign (as she is considered less likely to destroy anything) and goes off to be a hero again; while Bob, aka Mr Incredible, is left minding the house and the three kids. Eventually, of course, the whole family gets in on the action once more, as a new villain called the Screenslaver makes their presence known.

The great thing about The Incredibles was that it had all the elements of a heartfelt family film – as you’d expect from Disney/Pixar – while also providing the thrilling action that audiences like to see in a superhero film. Fourteen years later, Incredibles 2 manages to get the approach and the tone more-or-less the same. All of the action scenes are great, with the heroes finding plenty of inventive uses for their powers. I particularly liked Elastigirl’s first solo outing – where she demonstrates just what you can do with an elastic body and a motorcycle that splits in two – and baby Jack-Jack trying out his new random assortment of abilities in a fight with a raccoon.

But as in any truly great superhero film, the action is only secondary; the real meat of Incredibles 2 is in the family element. The dynamic between all the Parrs still feels very real and relatable, given their unique position as supers; and rather than rehashing issues from the first film, we see them being thrown into new situations with new problems, particularly Bob who has to adjust to being the stay-at-home dad. Violet’s character certainly feels rather different: having overcome her shyness (and started wearing her hair back to symbolise it), she is now in the more egocentric phase of being a teenager, making overdramatic comments when she’s in a bad mood and dry ones when she’s calmer. Dash, admittedly, hasn’t changed much and doesn’t have a real arc, but he’s still enjoyable. And Jack-Jack is a lot more fun to watch than most cartoon babies.

The script and the dialogue are especially well done. The Screenslaver’s message about people wanting everything to be brought to and done for them – including having superheroes solve their problems – certainly feels relevant for the modern day despite the film apparently being set in the Sixties; I was half-expecting the Screenslaver to make a comment about YouTube reaction videos. My only real problem with the script is that when you’ve seen enough Pixar films, as soon as the protagonist’s rich, enthusiastic benefactor turns up, you start wondering when they’re going to turn out to be evil, and….well, go see the film. I was also a bit confused about the family being surprised to discover that Jack-Jack has superpowers, when I thought that they’d be able to figure that out at the end of the first film: even if they didn’t get a good look at him attacking Syndrome, what about the phonecall from the babysitter?

In summary, Incredibles 2 is an excellent continuation of the first film’s story, and provides a great deal of fun and heart – here’s hoping for an Incredibles 3 in the not-too-distant future. Rating: 4.5/5.

Hi there. I've been blogging since January 2014, and I like to talk about all sorts of things: book reviews, film reviews, writing, science, history, or sometimes just sharing miscellaneous thoughts. Thanks for visiting my blog, and I hope you find something that interests you!
View all posts by R.J. Southworth →
This entry was posted in Film Reviews and tagged Elastigirl, film review, Incredibles 2, Mr Incredible, Pixar, superhero films, The Incredibles. Bookmark the permalink.