Posted on January 3, 2019 by Richard Southworth

Over the Christmas break, I saw two films at the cinema – and they were two very different films, except that they both had female leads, and the performances of those leads were a highlight of both productions.

We all know that these days, Disney is devoting a lot of effort to revisiting its old properties, with mixed critical results. Now their latest release is a sequel to Mary Poppins, no less than 54 years after the original classic starring Julie Andrews and Dick van Dyke. A few decades have passed since the events of the first film, and the Banks children, Michael (Ben Whishaw) and Jane (Emily Mortimer), are all grown up, with their parents apparently deceased. Michael, now a widower with three children, is struggling both emotionally and financially; indeed, his house is going to be repossessed by the end of the week, unless he can find a lost certificate which proves that he and Jane own enough shares in their father’s bank to cover the debt. With the family in turmoil, it is the perfect moment for Mary Poppins (Emily Blunt) to re-enter their lives, descending from the sky, taking Michael’s children on some fantastical adventures, and pointing everyone in the direction they need to go without them having any idea what she did.

Story-wise, the film covers most of the same beats as the original, but it does at least have a different family dynamic to work with: the children have had to grow up and learn to be responsible very quickly, and although Michael is more involved in his children’s lives than his own father originally was with him, he still needs to connect with them on a higher emotional level to heal his wounds. Visually, it’s a very pleasant watch, particularly the underwater sequence where Mary and the children go swimming in a bathtub, and the sequence with 2D-animated animals that follows soon after. While all the actors do a good job, Emily Blunt is the standout; it’s still the same Mary Poppins we know, alternating between cheeriness and a no-nonsense attitude, but it’s also Blunt’s own approach to the character rather than just copying Julie Andrews. (Blunt’s Mary seems to express a little more enthusiasm at times.) I wasn’t too enamoured with the songs, however: apart from the cabaret-style “A Cover is Not The Book”, and the energetic “Turning Turtle” sung by Meryl Streep, they’re all pretty forgettable, and some of the musical sequences went on too long for my liking. Overall, Mary Poppins Returns is agreeable enough, without quite managing to recapture the magic of its predecessor. 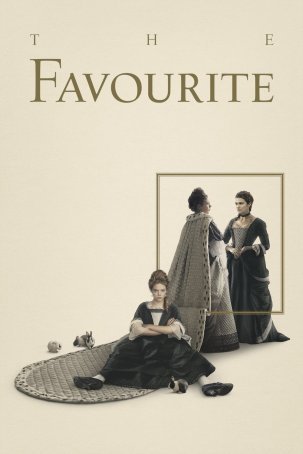 This historical film, directed by Yorgos Lanthimos, is set during the early 18th century and the reign of Queen Anne (Olivia Colman). The sickly and ineffectual Queen’s closest companion is Sarah, Duchess of Marlborough (Rachel Weisz), who both attends to her needs and makes political decisions for her. But then enters Sarah’s impoverished cousin, Abigail Hill (Emma Stone), who comes to the royal palace looking for employment. Starting as a lowly servant, Abigail gradually ingratiates herself with Anne and begins to displace Sarah in her affections – and of course, Sarah isn’t going to take that lying down.

The Favourite is what you might call an “artsy” film, one of those films that is a long way from being generic or straightforward, and all the more memorable for it. The style of the film meant that I never felt truly comfortable while watching it, and I expect that was the intent. Most of it takes place within the palace, with the outside world seeming far away; we see the characters in the same rooms and corridors over and over – sometimes through a fish-eye lens to make things even more warped – so that the few scenes that take place away from the palace can feel like a relief. The darkened scenes are truly dark, with the candles providing barely any illumination. Dramatic scenes are frequently accompanied by loud, ominous organ music, and there are a couple of scenes with a metronome-like sound effect in the background, which gets louder and louder until it becomes unbearable. Even scenes where the characters are having fun feel disturbing; covered in makeup and sporting powdered wigs, they revel in indulgent frivolity, enjoying such activities as throwing fruit at a dancing naked man. It doesn’t feel like a time and place you would ever wish to visit.

The three main actresses are all superb. Olivia Colman’s Queen Anne, laid low by various ailments and the loss of her seventeen children, is depressed, child-like and prone to mood swings, but not so clueless that she is totally imperceptive of the rivalry between Sarah and Abigail. Rachel Weisz’s Sarah, much more intelligent and mature, appears to have some real affection for Anne but still readily manipulates her. Emma Stone’s Abigail is easy to sympathise with at first, given how basically everyone around her abuses her, but is gradually exposed as a viper as she strives to get what she wants. Naturally for a period piece, the characters exchange more passive-aggressive remarks than you can shake a stick at.

The Favourite is a film that I probably wouldn’t watch again, but I could appreciate as being a high-quality piece of cinema. Rating: 4/5.

Hi, my name's Richard. I've been blogging since January 2014, and I like to talk about all sorts of things: book reviews, film reviews, writing, science, history, or sometimes just sharing miscellaneous thoughts. Thanks for visiting my blog, and I hope you find something that interests you! I have a main blog at https://velociraptor256.wordpress.com, and a blog focussed on nature at http://richardsnatureblog.wordpress.com.
View all posts by Richard Southworth →
This entry was posted in Film Reviews and tagged Emily Blunt, Emma Stone, film review, Mary Poppins Returns, Olivia Colman, Rachel Weisz, The Favourite. Bookmark the permalink.