Thank you very much to Petrel41 from Dear Kitty. Some Blog for nominating me for the Mystery Blogger Award! This award originates from Okoto Enigma, but unfortunately their blog no longer seems to be working.

Three Things About Myself

1. One of my ambitions is to see every Apollo command module. So far, I have seen three: 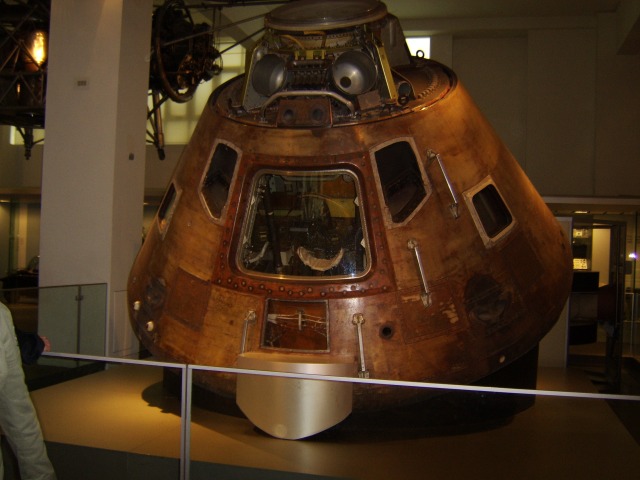 Apollo 14 – US Astronaut Hall of Fame, Florida: photographed in 2007. (Those are my cousins in front!)

2. I was in an earthquake once, while on holiday on the Greek island of Kefalonia in 2003. It’s a memory that has stuck very vividly in my mind. I heard the rumble first, and I was just wondering if it was a low-flying plane when the apartment started shaking. My dad shouted “Everybody out!” and we all scurried out the front door, at which point the shaking stopped and we all started laughing nervously; the whole thing lasted about 20 seconds. The quake measured 6.4 on the Richter scale, but there was no real damage where we were. We were supposed to be going home that day, but our plane was several hours late, and I was extremely on edge waiting at the airport, even more so when there was an aftershock that made the windows rattle.

3. I am a dog person today, but I used to prefer cats. I did my high school work experience at an RSPCA centre, and I liked working with the cats simply because they were quieter and much more calm. Then my family actually got a dog and from then on, there was no looking back.

I’ll pick my review of the Pixar film Inside Out. The film itself really made me think, and the review itself was one I felt very pleased with.

1. Who is your favourite artist?

Ken Marschall, for his paintings of the Titanic and other ships.

2. Who are your three least favourite prominent people in politics or business?

Donald Trump may seem an obvious answer, but that’s the way of it: on top of much else that he’s done (and continues to do), a significant portion of my own judgement of politicians comes from their environmental policies, and in that area, Trump simply does not give a damn. In terms of my own government, I’m not happy about Brexit, but it’s difficult to narrow responsibility for that down to just a few people.

3. Which is your favourite bird species?

The peregrine falcon, the fastest animal on Earth and one of the most globally widespread of all birds.

4. Which is your favourite mammal species?

The killer whale, a fascinating animal in so many ways: it is a very successful predator with a variety of sophisticated hunting techniques, and the global population is divided into genetically distinct races which differ in social behaviour and preferred prey.

5. 2019 has only just started. What is the best thing which happened to you in this new year?

I managed a 20-minute run with an average pace of 4:58 per kilometre, the fastest I’ve ever run!

1. What city have you not yet visited that you would most like to?
2. What three books would you take to a desert island?
3. Do you prefer dogs or cats? (You can say neither if you like!)
4. What do you most enjoy writing about?
5. Literally a funny question: what was the last thing to make you laugh out loud?

Hi there. I've been blogging since January 2014, and I like to talk about all sorts of things: book reviews, film reviews, writing, science, history, or sometimes just sharing miscellaneous thoughts. Thanks for visiting my blog, and I hope you find something that interests you!
View all posts by R.J. Southworth →
This entry was posted in My Thoughts and tagged blogging award, Mystery Blogger Award. Bookmark the permalink.