On 16th July 1969, American astronauts Neil Armstrong, Michael Collins and Edwin “Buzz” Aldrin blasted off in a Saturn V rocket from Cape Kennedy in Florida, headed for the Moon. Four days later, Armstrong and Aldrin – in their lunar module Eagle – became the first human beings to touch down on the surface of a world other than the Earth, fulfilling President John F Kennedy’s 1961 challenge to land a man on the Moon before the end of the decade. To celebrate the fiftieth anniversary of this momentous achievement, here are ten things you may not have known about the Apollo 11 mission: 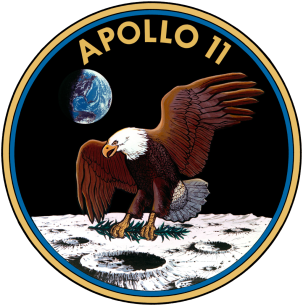 2. A few different reasons have been given for Neil Armstrong being chosen to step onto the Moon ahead of Buzz Aldrin, such as that it was more appropriate given that Armstrong was the mission commander, or that his reserved and modest personality made him better suited to handle the celebrity that would inevitably come from being the first man on the Moon. Officially, at least, the deciding factor was that the lunar module hatch opened inward towards Aldrin, meaning he could only get out first if he and Armstrong switched places in the cabin, which would be very difficult in bulky spacesuits.

3. The crew of Apollo 11 did technically see a UFO while they were on their way to the Moon – or at least, an object that they couldn’t identify for certain. It looked vaguely L-shaped, and appeared to be flashing; the crew held off reporting it openly in case an overexcited public got any ideas about aliens. The most likely explanation is that the object was a panel from the Saturn V rocket’s third stage, which was rotating as it went, and thus intermittently exposing its most reflective side to the Sun.

4. As Armstrong and Aldrin descended to the Moon, they overshot their intended landing site in the Sea of Tranquility; taking manual control in the final stages, Armstrong had to steer the lunar module away from a field of boulders, almost running out of fuel in the process. The reason for the overshoot was that the tunnel between the command module and lunar module hadn’t been completely vented before the two spacecraft undocked; the residual air gave Eagle an unexpected little nudge, which put it slightly ahead of where it was supposed to be when the descent began.

5. Another problem that occurred during the landing were that program alarms repeatedly went off; coded 1202 and 1201, the alarms indicated that the spacecraft’s computer was overloaded. This was later determined to be because the rendezvous radar had been left in automatic mode, in case Armstrong and Aldrin needed to abort and rendezvous with the command module; this was giving the computer extra data to process, while it was already handling all the data related to the descent. Fortunately, these particular alarms had previously come up during a simulation for the Mission Control team, so guidance officer Steve Bales could advise Flight Director Gene Kranz that the computer could handle the issue and an abort wouldn’t be necessary.

6. The first ever walk on the Moon was quite conservative, in terms of time and distance. There were only 2 hours and 31 minutes between opening the lunar module’s hatch and closing it again; Armstrong and Aldrin spent their short time on the surface collecting rock samples, setting up experiments and the American flag, and receiving a congratulatory call from President Richard Nixon. The furthest that either man went away from the lunar module was when Armstrong spent a few minutes investigating a crater about sixty metres away.

7. According to Neil Armstrong’s biography First Man by James R Hansen, there are only five still photographs of Armstrong himself on the lunar surface, including one where he can be seen reflected in Buzz Aldrin’s visor. For most of the moonwalk, Armstrong was holding the single Hasselblad camera, and on the occasions when Aldrin had the camera, he was preoccupied with scheduled tasks.

8. Shortly after the moonwalk, Aldrin noticed that a switch on the control panel had been inadvertently broken off; this switch happened to be the one which armed the lunar module’s ascent engine, used to lift off from the Moon. Fortunately, when it was time to lift off, Aldrin was able to operate the switch anyway by sticking a felt-tip pen into the socket.

9. Armstrong and Aldrin didn’t sleep well during their rest period on the Moon. For one thing, there wasn’t much space to get comfortable in the cramped lunar module cabin; Armstrong lay on the engine cover, his head resting on a shelf and his legs in a sling, while Aldrin curled up on the floor. As well as that, the cabin was cold, the life support systems made noise, and they couldn’t take their spacesuits off. From Apollo 12 onwards, astronauts on the Moon slept in hammocks, and from Apollo 15 onwards, they were able to remove their spacesuits when going to bed.

10. The Apollo 11 mission brought 21.6 kilograms of moon rock back to Earth, from which three new minerals were discovered. One was named tranquillityite after the landing site, the Sea of Tranquility; another was named armalcolite, after Armstrong, Aldrin and Collins.

Hi there. I've been blogging since January 2014, and I like to talk about all sorts of things: book reviews, film reviews, writing, science, history, or sometimes just sharing miscellaneous thoughts. Thanks for visiting my blog, and I hope you find something that interests you!
View all posts by R.J. Southworth →
This entry was posted in History, Science and tagged Apollo 11, Buzz Aldrin, Michael Collins, Moon landing, Neil Armstrong. Bookmark the permalink.