Film review: A Beautiful Day in the Neighbourhood 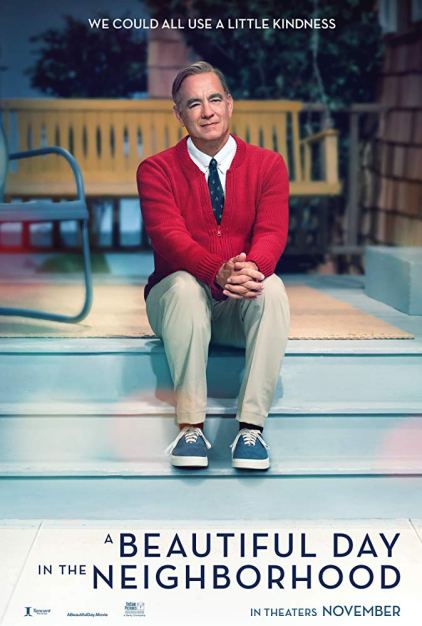 Growing up in the UK, I didn’t get to watch Mister Rogers’ Neighbourhood – all I really knew of Fred Rogers was the occasional reference to him on other American TV shows. I learned a lot more about him more recently from watching the documentary film Won’t You Be My Neighbour, and I find him a very interesting and affirming figure. With all the revelations about entertainers like Jimmy Savile, Rolf Harris and many others, it’s easy to imagine that Rogers was too good to be true and must have had some skeletons in his closet – but no, apparently his wholesome, optimistic, non-judgemental persona was entirely sincere, which is rather wonderful. So who better to play him onscreen than Tom Hanks, another beloved figure who, while actors all around him are accused of misconduct, remains pure and above reproach?

In A Beautiful Day in the Neighbourhood, however, Hanks’s Mr Rogers isn’t actually the main character – he’s more of a catalyst and advisor for the central figure, a journalist named Lloyd Vogel (Matthew Rhys). While the film is inspired by a 1998 article written about Rogers, the story and Lloyd are fictional. Lloyd has a cynical attitude on life, much of which stems from being abandoned by his father Jerry (Chris Cooper) – so he is less than enthusiastic when he is given the assignment of writing a puff-piece about Mr Rogers. In their interviews, however, it ends up being Mr Rogers who asks most of the questions, gradually persuading Lloyd to look inside himself and confront his emotional issues.

The story of a cynic whose heart is thawed by a more optimistic figure has been told many times before, but I liked this take on it for its subtlety and humanity. Rather than having Lloyd learn some life lessons by outwardly embracing Mr Rogers’s world and philosophies – though this sort-of happens in one bizarre dream sequence – his development is internal: his time with Rogers acts like a gentle therapy session, as he learns and opens up through the power of talking and reflection. The overall tone is sentimental without ever being sugary-sweet, and if the film wants to encourage we, the audience, to think more like Mr Rogers, it doesn’t throw it in our faces. There’s a scene late on where Rogers asks Lloyd to reflect on something for one minute, and spends much of that minute gazing benevolently into the camera, clearly encouraging the audience to do the same – but by that time, we’ve been persuaded to go along with him just like Lloyd.

Even if Mr Rogers isn’t the focus, the story of Lloyd and his family is engaging enough to hold attention, with the central figures all feeling very human and understandable. Even Jerry, who could have been just a two-dimensional deadbeat dad, is instead more fleshed out, portrayed as a man who sometimes has a disagreeable attitude, but acknowledges that he has made mistakes and wants to make up for them. While Mr Rogers himself – who is portrayed very convincingly by Hanks – is not explored emotionally to the same degree, he is still made out to be human. He is not a saint, nor does he pretend to be, being surprised and almost confused when Lloyd asks if he sees himself as a hero; he is simply a man who wants to do good, and does. I also liked the aesthetic of the film, with Mister Rogers’ Neighbourhood almost being used as a framing device; there are scenes of Rogers talking about Lloyd to the audience as if filming an episode of the show, and several scene transitions use the show’s models to demonstrate travelling somewhere, which adds another layer of charm.

So even if you don’t know that much about Fred Rogers, A Beautiful Day in the Neighbourhood is still very much worth a watch, for a good dose of positivity in a world that so often seems grim. Rating: 4.5/5.

Hi there. I've been blogging since January 2014, and I like to talk about all sorts of things: book reviews, film reviews, writing, science, history, or sometimes just sharing miscellaneous thoughts. Thanks for visiting my blog, and I hope you find something that interests you!
View all posts by R.J. Southworth →
This entry was posted in Film Reviews and tagged A Beautiful Day in the Neighbourhood, film review, Fred Rogers, Tom Hanks. Bookmark the permalink.

1 Response to Film review: A Beautiful Day in the Neighbourhood