Readers of this blog will already be familiar with my interest in maritime history in general, and the Titanic in particular. Having visited the museum dedicated to the Titanic in Belfast, and seen a piece of the wreck in Las Vegas, the natural next place to go was Southampton. The city’s connection to Titanic goes beyond the fact that this is where, on 10th April 1912, the ship departed England on its first and last voyage. 724 members of the Titanic‘s crew lived in Southampton – obviously a natural place to reside between jobs when one worked at sea – and 549 of them died in the sinking, leaving a devastating impact on the community.

My first stop upon arrival was the SeaCity Museum. It happened to be pouring with rain, but thankfully I was allowed into the shelter of the museum a little earlier than my reservation time. The museum contains exhibits dedicated to the history of Southampton itself, but the Titanic exhibit is the highlight. A wide variety of objects from 1912 were on display, including Titanic menus which also functioned as postcards. There were interactive displays (accompanied with hand sanitiser dispensers, of course), where you could try sending a message in Morse code or steering the Titanic out of port. There were also films featuring oral accounts of the sinking by survivors, and describing the topics discussed at the disaster inquiry, from whether the Titanic was travelling too fast to whether binoculars would have aided the lookouts. 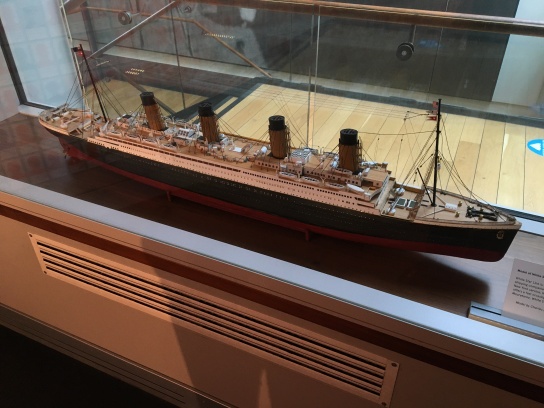 After the museum, when the rain had eased off, I had a walk around Southampton, looking at points of interest relating to the Titanic. This memorial is dedicated to the ship’s eight musicians, all of whom perished; it is actually a replica of the original memorial, which was destroyed when Southampton was bombed in 1940.

This memorial is dedicated to the Titanic‘s engineers; as with the musicians, all of them were lost.

This was a fountain “erected in memory of the crew, stewards, sailors and firemen”, which was eventually moved from Southampton Common to Holyrood Church.

There is no public access to Berth 44, the place where the Titanic left Southampton, since it is still in use for ships. I could, however, get a look at the general area from an accessible view point. 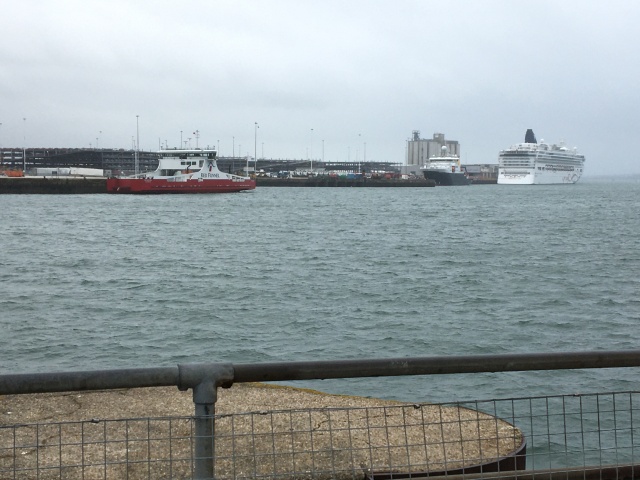 From that point, there was something else I was able to see that I hadn’t known about before arriving in Southampton: the Queen Mary 2. Due to the pandemic, Cunard’s fleet are currently not in service, but the QM2 had briefly come into Southampton for provisioning. A quick look at Southampton’s online ship schedule indicated when the ship would be leaving, so I stuck around to watch it. With a tug at its bow, the QM2 moved away from the dock so slowly that you could only perceive it by comparing its position to the nearby cranes; then it made its way down Southampton Water, right past where I was, an impressive sight indeed.

It’s always nice to see something you weren’t expecting on a sightseeing trip. Who knows, maybe I’ll actually sail on the QM2 someday.

Hi there. I've been blogging since January 2014, and I like to talk about all sorts of things: book reviews, film reviews, writing, science, history, or sometimes just sharing miscellaneous thoughts. Thanks for visiting my blog, and I hope you find something that interests you!
View all posts by R.J. Southworth →
This entry was posted in Out and About and tagged Queen Mary 2, SeaCity Museum, Southampton, Titanic. Bookmark the permalink.