The Shining – The Book vs The Film

Posted on December 10, 2014 by Richard Southworth 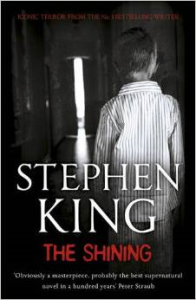 Partly because horror isn’t my favourite film genre and partly because the opportunity just never came up, I’d never seen The Shining until a few weeks ago, when I just happened to find it on TV while I had nothing else to do. I watched it, enjoyed it very much, and being a fan of Stephen King, decided to take a look at the book soon afterward.

The basic story is the same in both versions: recovering alcoholic Jack Torrance (Jack Nicholson) gets a job as the winter caretaker of the Overlook, a relatively isolated Colorado hotel. This means spending several months alone in the hotel with his wife Wendy (Shelley Duvall) and young son Danny (Danny Lloyd), largely cut off from the outside world once the snow sets in. What would be a trying situation under the best of circumstances becomes even more so as Danny experiences disturbing visions around the hotel due to his psychic ability, “the shining” – while Jack becomes increasingly unstable as an unknown force works its influence on him.

Even though the story and most of its elements remain the same, the film adaptation directed by Stanley Kubrick feels like its own separate entity from the book. So which is better?

The book, sadly, isn’t that interesting for much of its length. Before Jack really starts to lose his mind and thus raise the stakes, there’s a lot of time spent on establishing the Overlook’s backstory, the family’s backstory, Danny’s powers, and a few strange occurrences here and there. These sections could have done to be cut down a tad; they slow the overall pacing. And when King tries to be scary in these sections, he often doesn’t succeed, and comes off looking like he’s trying too hard – like when Danny is (possibly) threatened by a hose, of all things.

To the book’s credit, however, things definitely pick up in the last quarter or so (which, since this is a long book, still means plenty of material). The pacing accelerates, there’s lots of tension in the air, and the events and images get seriously creepy. The characters are handled very well too, especially Jack. As a man with a lot of problems in his past and a seriously tormented mind, it’s easy to make a good story out of Jack, and King delves deeply into his head while clearly documenting his descent in madness.

The film, meanwhile, takes the same story and handles it in quite a different way. Throughout the book, there’s generally little doubt about the fact that supernatural forces are at work in the Overlook. For most of the film, it’s more ambiguous. We know the characters are very isolated, and the style of filming ensures that we feel their isolation. Thus, it could well be that this is what’s driving Jack crazy. Even some of his interactions with Wendy and Danny look like they may or may not be happening in his head. Admittedly, towards the end, things happen that really can only be explained by actual ghosts being present, but I like the fact that the film allows the audience to use their imaginations. I like ambiguity, as long as it doesn’t lead to solid contradictions like in The Snow Child.

Without Jack Nicholson in the main role, the film might still be good, but it certainly wouldn’t be as memorable. The film version of Jack Torrance doesn’t have as many clear complexities as the one in the book, but Nicholson still gives real life to him – and of course, he absolutely nails the crazy breakdown scenes as only Jack Nicholson could. Shelley Duvall as Wendy manages to find a good balance between a crying, screaming horror movie victim and a more proactive figure, though the Wendy in the book is a bit better overall. Danny Lloyd does a surprisingly good job for a child actor, apart from a few of his scared faces which look a bit silly.

Rather than just making a straightforward adaptation, Stanley Kubrick used various techniques to make the film into a unique and unsettling experience. Sometimes there are weird edits, like when Jack is looking down at a scale model of the Overlook’s maze, and it cuts to a shot from above of Wendy and Danny in the real maze, as if they’re in the model and Jack is looking at them. There are a lot of long camera shots, like those following Danny as he rides his tricycle through the corridors, with just the ongoing sound of the wheels on the carpet and floor. And when the spooky images come, they’re just as disturbing – if not more so – than in the book. A combination of the visual imagery, the suspense, and Nicholson’s performance, meant I felt more freaked out when watching the film.

So in my opinion, the film of The Shining is easily better than the book – I would give the book 3/5 and the film 4.5/5. The film deserves to be regarded as a great film in general, not just a great horror film. I was going to say that this story actually works better in the visual medium, but really, that’s all dependent on how the author and the filmmaker chose to handle it in its two different forms.

Conveniently, my NaNoWriMo regional group are reading Doctor Sleep – King’s recent sequel – to discuss it at our next meeting next year, so I can dive straight into that!

Hi, my name's Richard. I've been blogging since January 2014, and I like to talk about all sorts of things: book reviews, film reviews, writing, science, history, or sometimes just sharing miscellaneous thoughts. Thanks for visiting my blog, and I hope you find something that interests you! I have a main blog at https://velociraptor256.wordpress.com, and a blog focussed on nature at http://richardsnatureblog.wordpress.com.
View all posts by Richard Southworth →
This entry was posted in Book Reviews, Film Reviews and tagged book review, book vs film, Danny Lloyd, film review, Jack Nicholson, Shelley Duvall, Stanley Kubrick, Stephen King, The Shining. Bookmark the permalink.

1 Response to The Shining – The Book vs The Film