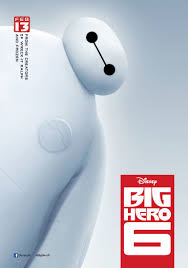 With Disney’s latest animated films having gotten me back into Disney after some time away, I’ve been really eager to see Big Hero 6 for a while. Unfortunately I’ve had to wait as the USA got it a couple of months before the UK, but this weekend, I finally got the chance. And…I really enjoyed it! Disney are still maintaining high levels of quality with their animated films even if Pixar have gone downhill lately; The Incredibles is still the peak as far as animated superhero films go, but Big Hero 6 isn’t far behind.

Our protagonist is Hiro, a teenage genius living in the city of San Fransokyo. After his older brother Tadashi persuades him to apply for the robotics school where he studies, Hiro invents multi-purpose Microbots for an expo in order to get in – but just as everything’s looking great, a fire breaks out at the expo, killing Tadashi. After weeks of wallowing in depression at the loss of his brother, Hiro discovers that someone has stolen his Microbots and is now using them for nefarious purposes. There’s clearly only one way to respond: by forming a team of superheroes – comprised of four of Tadashi’s fellow students, and his healthcare robot Baymax – to find out what this villain is up to and take him down!

For most of the film, pretty much everything is done right. The story and characters are great: the events leading up to the hero team’s inception feel like a natural progression, and I like how they clearly struggle at first, down to jumping at nothing and making a mess of cutting a hole in a metal door. Baymax himself is definitely one of the highlights: Big Hero 6 rivals Terminator 2 in making you feel sympathy for an machine, and Baymax doesn’t even have a proper face. Yet he still displays real character and innocence, just from head movements and the sounds he makes – plus his care-motivated actions make you feel very warm towards him, even if it is just programming. Indeed, I often got Terminator 2 vibes from the building relationship between Hiro and Baymax, such as when Hiro teaches Baymax to fistbump.

The visuals are just as good as anything else Disney’s done lately: the city of San Fransokyo looks gorgeous, and there’s an epic flying sequence that shows it off particularly well. The villain’s use of his massive swarm of Microbots, and the inventive tools at the heroes’ disposal, makes for some excellent action scenes. And it’s a really funny film too: I can’t remember the last time I went to the cinema and people were laughing so much, particularly at Baymax’s antics.

Big Hero 6 isn’t perfect, however, and most of the problems crop up in the second half. First is the identity of the villain: at first, you think you can figure it out – and the heroes have enough awareness to think along the same lines, which I liked. However, once they think they know who the villain is, you think, “Okay, so it’s probably not actually him, then” – from that point, it was fairly simple to predict who he really was, which lessened the impact of the reveal. Also, while his motivation is interesting, his ultimate goal seems a bit weak. While the first and second acts are well paced, the third act with its climactic action scene feels rather rushed in comparison – plus there could have been more effort in the dialogue here, some of which is very cliche. But these aren’t really significant problems, and the climax is still thrilling and emotional.

So yes, if you’re looking for some good old family fun, Big Hero 6 is definitely worth a watch! Rating: 4/5.

I should also give a mention to Feast, the short that comes immediately before the film – this is also really good. If you own a dog that always keeps a watchful eye on your dinner plates, Feast will particularly appeal to you.

Hi there. I've been blogging since January 2014, and I like to talk about all sorts of things: book reviews, film reviews, writing, science, history, or sometimes just sharing miscellaneous thoughts. Thanks for visiting my blog, and I hope you find something that interests you!
View all posts by R.J. Southworth →
This entry was posted in Film Reviews and tagged Baymax, Big Hero 6, Disney, film review. Bookmark the permalink.