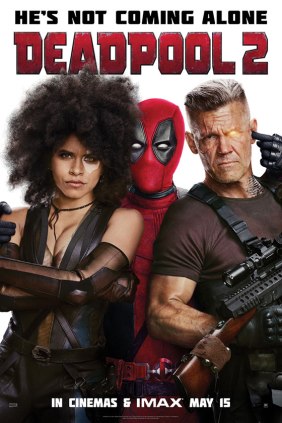 Produced as a result of leaked test footage, and delivering a far more comic-loyal version of the character than X-Men Origins: Wolverine, the first Deadpool film was a huge success. On a budget of $58 million, it was not only the highest grossing film in Fox’s X-Men franchise, but the highest grossing R-rated film ever – that’s music to a studio’s ears, so a sequel was inevitable. As before, the marketing has been both hilarious and relentless – and they even got Celine Dion to record a single for the film! As for the film itself, despite there being a new director – David Leitch in place of Tim Miller – the general approach seems to have been that if it ain’t broke, don’t fix it.

Deadpool, a.k.a. Wade Wilson (Ryan Reynolds) is continuing his career as a mercenary and assassin, while still sporting his red-and-black costume and super-healing ability – but the beginning of the film sees his life abruptly and painfully falling apart. This leads to Colossus (Stefan Kapicic) dragging the despondent Deadpool to the X-Mansion, offering him friendly support, and a new direction in life as an X-Man. Unfortunately, Deadpool’s first mission ends with him being imprisoned along with a volatile young mutant named Russell (Julian Dennison) – and if that wasn’t bad enough, a time-travelling cyborg named Cable (Josh Brolin) turns up, intent on killing Russell and changing the future. From there, Deadpool is left to build his own mutant team, save his new friend, and hopefully become a better person in the process.

The main positive about this sequel is that the story is much meatier than the first film. With Deadpool’s origins out of the way, there’s more room for character development, and a more complex framework to support all the action and humour that the audience is expecting. The amount of overall content is escalated, including a surprise appearance by a major X-Men character (who is much more loyal to the comics than they were when they last appeared in the franchise). The main negative is that it takes a while for the film to settle into a rhythm: in the first act, the tone is all over the place, bouncing from the extremes of seriousness to tongue-in-cheek, before it becomes more stable. Aside from that, everything else is basically the same as what came before. The jokes – ranging from fourth-wall breaking, to pop culture references from a wide range of sources, to taking shots at other superhero films – are still funny and relatively fresh. Ryan Reynolds’s performance is still brilliant, and of the new cast, Zazie Beetz as Domino – who boasts good luck as a superpower – is the highlight.

So this is only a short review, but there’s not that much to say. What it boils down to is, whatever you thought of the first Deadpool film, Deadpool 2 gives you more in the same vibe. Rating: 3.5/5.

Hi there. I've been blogging since January 2014, and I like to talk about all sorts of things: book reviews, film reviews, writing, science, history, or sometimes just sharing miscellaneous thoughts. Thanks for visiting my blog, and I hope you find something that interests you!
View all posts by R.J. Southworth →
This entry was posted in Film Reviews and tagged Deadpool, Deadpool 2, film review, Ryan Reynolds. Bookmark the permalink.